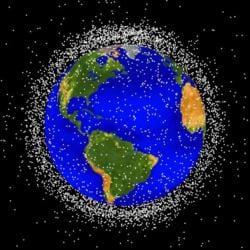 NASA has selected VectorNav Technologies, LLC for a Phase 1 STTR contract to develop a model for space debris removal technology. Through a partnership with the Texas Engineering Experiment Station (TEES) and faculty at Texas A&M University, the research will combine advanced robotic technologies developed by Texas A&M’s Land Air and Space Robotics Laboratory (LASR) along with VectorNav’s inertial sensing and dynamics modeling expertise to achieve accurate sensing required both for high-fidelity simulation and autonomous proximity operations.

The problem of debris in low Earth orbit is an issue of rising concern among NASA and other organizations seeking to launch successful space missions. As ground-based modeling and simulation of missions to remove space debris are notoriously difficult, NASA has enlisted VectorNav Technologies, in partnership with TEES, to develop a ground-based simulation platform that will model space debris removal missions. The approach proposed by VectorNav and TEES significantly increases the capability of such testing operations and improves the chance of successful active debris removal missions.

As the Principal Investigator for the project, Dr. John L. Junkins, Distinguished Professor of Aerospace Engineering at Texas A&M University and a member of the National Academy of Engineering, will play a key role in establishing supporting robotic platforms with the omnidirectional and six degree of freedom robot, HOMER, as well as providing resources for hardware-in-the-loop testing at LASR’s facilities.

“We’re looking forward to leveraging our extensive in-house expertise in sensing and dynamic systems to address this pressing global issue of space debris in low Earth orbit,” said Jeremy Davis, VectorNav’s Director of Engineering and Project Manager for the contract. “Especially so in that this work will be conducted with two great partners in NASA and TEES.”

The NASA STTR program provides opportunities for high technology companies and partnering research institutions to participate in Federal Government sponsored research and development efforts in key technology areas being investigated by NASA. The contract is the first of its kind awarded to VectorNav Technologies by NASA.