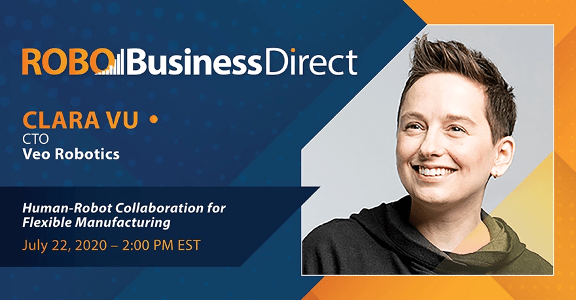 Flexibility and judgment, human capabilities that cannot be matched by robots and automation, are essential qualities for meeting the manufacturing demands for faster product cycles and shorter production runs. As a result, humans will continue to be crucial to the factories of the future, but they will not be working alone. Transforming factories means physically bringing together humans and robots. With safe human-robot interaction, manufacturers can replace the traditional assembly line with flexible cellular manufacturing to achieve mass-customization. But how is this accomplished?

In this session, Clara Vu, CTO of Veo Robotics, will describe the advantages of flexible manufacturing enabled by human robot collaboration. Vu will also discuss the technical challenges in human-robot interaction, and what it means to create a safety-certified collaborative workcell. An examination of the impact of human-robot collaboration on the future of manufacturing, along with the transition from factories that are flexible to factories that can self-optimize, will also be discussed.

Clara Vu has been building autonomous robots for over 20 years. As CTO of Veo Robotics, Clara leads the company’s advanced technology development and product roadmap planning to solve fundamental problems in durable goods manufacturing. She began her career at iRobot in its early days, where she developed robots for oil well exploration and wrote the programming language behind Roomba. After iRobot’s IPO, Vu went on to found Harvest Automation, where she led software development for their autonomous agricultural materials handling system. She holds a BS in mathematics from Yale University.

Eugene Demaitre is Senior Editor at The Robot Report. Prior to working for WTWH Media, he was an editor at BNA (now part of Bloomberg), Computerworld, TechTarget, and Robotics Business Review. He has participated in conferences worldwide, as well as spoken on several webcasts and podcasts. Demaitre is always interested in learning more about robotics. He has a master’s from the George Washington University and lives in the Boston area.