Enabling the Future Scale of BVLOS in Non-Segregated Airspace

In the following case study Sky-Drones discuss their involvement with Project RISE which focused on the approvals process and traffic management for flying within airspace controlled by an Air Navigation Service Provider (ANSP), integrating across a combined stack of independent software and hardware.

The project outputs allow automated transfers of information and communications between a drone operator and the airspace controller.

Successfully completed in November 2021, Project RISE was within Phase 2 of the Future Flight Challenge, funded by Innovate UK, part of UK Research and Innovation, through the Industrial Strategy Challenge Fund. Sky-Drones was a part of a consortium along with Dronecloud, Cranfield University, Frequentis and Skyports.

As Enterprise deployments of drones are now being rolled out across industries to survey and monitor sites at previously unknown levels we need new tools to manage them.

Project RISE helps to unlock the future of drone operations through integration.

Project RISE was focused on the approvals process and traffic management for flying within airspace controlled by an Air Navigation Service Provider (ANSP), integrating across a combined stack of independent software and hardware.

Multiple scenarios were tested successfully, some with more than one drone in the air at the same time. Multi-rotor and fixed-wing aircraft were used.

Through integrations between these systems, we can automatically share electronic ID, flight telemetry data, alerts and other communications, with a view to developing full Network Remote ID (Net-RID). This streamlines approval and traffic management, breaking down barriers to scale. At the same time, it readies the software platforms towards participating in all UTM regulatory frameworks, such as the UK’s Open Access UTM Framework and U-Space.

Multiple scenarios were tested successfully, some with more than one drone in the air at the same time.

An inspection flight and a delivery flight were separately planned in Dronecloud for two aircraft to fly at the same time but not spatially overlapping. Dronecloud automatically sent flight plans to smartSIS for approval. ATC were happy with both flights and approved them in smartSIS. Both pilots could see in Dronecloud that their flights were approved, and so requested take-off. ATC approved take-off for both in smartSIS, and the flights commenced. 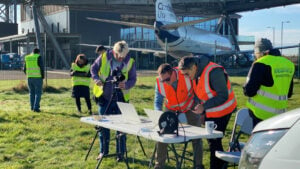 System Integration – After Project RISE, user accounts and aircraft can be linked between Sky-Drones GCS and Dronecloud, feeding electronic ID and telemetry data from Sky-Drones to Dronecloud. If a flight is planned within an area requiring approval via Frequentis’ smartSIS, flight plans are sent automatically by Dronecloud to smartSIS for approval. Approval status and alerts are tracked and displayed to the Dronecloud operator. Flights can be seen and tracked in Dronecloud’s Live View, with a message centre and interactive buttons to allow a pilot or flight operations coordinator to carry out two-way integrated communication with the relevant ANSP. All significant events and communications are logged. 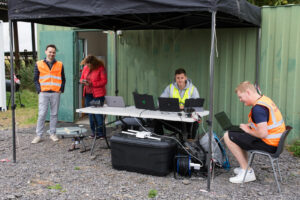 BVLOS Flights – The project produced a proof of concept for automated integration of systems needed for planning and carrying out BVLOS and other flights in non-segregated controlled airspace, including achieving necessary approvals from airspace controllers. Our example use-case is an airport environment where ATC needs to simultaneously control both drones and traditional air traffic. At the end of the project, we carried out field trials at Cranfield Airport in the UK. 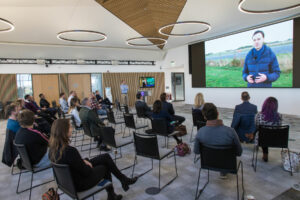 Automated Flight Approvals – Rather than creating a proprietary closed stack of UTM services within a single platform, RISE demonstrates an open approach to delivering a range of UTM services across multiple integrated platforms in a flexible and inclusive way. Integrations were delivered through open standard Application Programming Interfaces (APIs), allowing other GCS, drone manufacturers and providers of UTM services to connect in through these integrations.