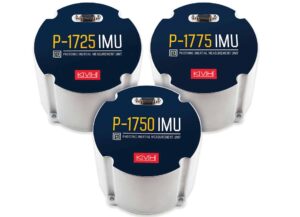 When researching what sensor to purchase for their system, engineers include a review of sensor performance specifications. Most sensor manufacturers publish product specifications on their websites for this very reason. However, specification datasheets for gyros and inertial systems can be challenging to compare since the specifications included are often documented differently depending on each company and the written specification.

KVH has conducted the following Q&A with Roger Ward, the company’s Director of FOG Product Development, to get his thoughts about the most critical specifications for gyros and inertial sensors and what those specs mean.

KVH: One spec that is often featured very prominently is Angle Random Walk, also known as ARW. What is it and why does it matter?

Roger Ward: Angle Random Walk is the noise level a sensor produces. Think about listening to your favorite song on the car radio, and suddenly there’s static and background noise. That noise is ARW. In other words, it’s the inherent background noise the device produces, and no matter what, you’re not going to get rid of it entirely. So, the smaller the ARW number, the less noise the device produces. This is the technology that people will pay for.

If you want something with an even better ARW, it’s very specialized and expensive technology. KVH offers outstanding robust and competitive sensor solutions. I don’t know of anybody – and I’ve been at KVH for a decade – who ever said our gyros’ Angle Random Walk isn’t good enough for their application.

KVH: What about drift, and why does a gyro do it?

Drift is when the sensor shouldn’t be moving, but you’re getting these small errors indicating movement. Over time a gyro drifts at so many degrees per hour – like a tenth of a degree per hour. But if it’s sitting there for 24 hours now, you start to see measurable change. And that’s just a property of all inertial sensors.

Customers care about the drift rate under temperature changes, vibration, and shock – all the environmental conditions. Drift rate is the most significant thing people will talk about regarding the performance of gyros or IMUs. The technical term for describing drift is called bias. In-run bias stability means if I turn on my device and let it run, how much will it drift over time. Bias repeatability means if I turn the device on and it runs, turn it off, and turn it on again, how different is it? People care about these are small differences in drift as it affects overall performance.

KVH: You just mentioned repeatability. Why does it matter?

RW: People want to know that the inertial system will be quiet or have a low ARW number and that the system will always work – in other words, be reliable. And they want to know it will operate the same way every time, which is repeatability.

It’s important to understand that the people buying these sensors are designing them into their products. It takes a significant amount of time; we call it a sales cycle. You sell them a handful of IMUs that they integrate into their application, and then they must test and qualify just like we do when we build our products.

They don’t want to do that with a bunch of our different products or repeatedly, so we sell a product that can do more than one thing. Suppose you’ve already tested and qualified the IMU or INS (inertial navigation system) as a navigation solution. In that case, you know it can be successfully used for this other need without re-qualifying the system. That makes it easier for your customer to integrate into other applications.

KVH offers open OEM (original equipment manufacturer) style solutions that make integrating into their platform or application easier. The other thing that we offer is flexibility. You might care about operating in three dimensions, some people only care about two or one dimensions, so KVH offers a one-, two-, or three-axis solution. That flexibility is not available at every manufacturer.

KVH: Why does high bandwidth matter in gyros and inertial sensors?

RW: High bandwidth means fast sampling rates that enable you to make lots of measurements quickly. Sensors with high bandwidth that are non-ITAR (International Traffic in Arms Regulations) and exportable without a license are huge for KVH. The companies that we compete against, like Northrop Grumman, make restricted technology and can’t export it.

KVH could easily go beyond the exportable specifications, but we’d be cutting out a significant market share if we do. So, we have a very precise and high-performing solution with outstanding performance, but that doesn’t violate any export regulations. That generates a lot of opportunities for us.

KVH: Autonomous platforms like driverless cars and other systems are increasingly in the news. Is there another specification, like scale factor, that really matters in these applications?

RW: Usually, the people that care about scale factor are developing autonomous vehicles. Scale factor stability is the accuracy of the gyroscope in monitoring the sensor’s angular velocity, expressed in parts per million (ppm). Scale factor error is the deviation from the ideal of the sensor’s sensitivity.

If I have a scale factor error and go around a cloverleaf to get onto my highway, I’ll think I’m at one location when I’m done, but I’m 10 centimeters away. On a busy roadway, 10 centimeters might be enough to get yourself into a problem.