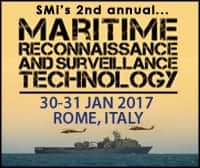 About Maritime Reconnaissance and Surveillance Technology 2017

Following the success of the 2016 conference, the SMi Group is proud to announce the 2nd Maritime Reconnaissance and Surveillance Technology. The event will be held in Rome on the 30th and 31st of January 2017.

We aim to replicate and improve on last year’s event,  by providing a more regional focus -not just on the Mediterranean, but other areas of interest including the Black Sea and further beyond in the Asia Pacific region. All of which have a keen collective interest to ensure the safety and security of legitimate maritime activities.

This high level meeting will bring together senior military leadership, project decision makers, technical experts and cutting edge industry solution providers, to explore future endeavours that will enhance the security and stability of the world’s oceans.

To learn more about Maritime Reconnaissance and Surveillance Technology 2017, to register to attend or exhibit, please click below.