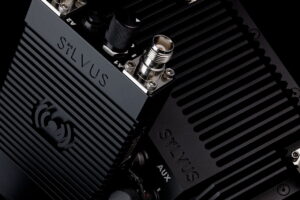 Silvus Technologies has confirmed that it has successfully demonstrated a network made up of 559 of the company’s StreamCaster MANET radios, where every node generated position location information (PLI) data.

To replicate a real-world scenario, all radios created a single flat network, operating on the same frequency in a single narrowband channel. EUDs attached to each node generated PLI data which was multicast throughout the network (All to All).

Cursor on Target (CoT) Visibility – measured at multiple time intervals of up to 60 seconds on both 2.5MHz and 5MHz channel bandwidth. Within the first 10 seconds, the network achieved 98% total visibility, at 30 seconds and above, each radio exhibited 100% visibility.
Latency – measured between endpoints in the loaded network, latency of the network averaged less than 45 milliseconds.
Network Capacity – utilizing Silvus’ enhanced multicast routing algorithms, PLI data was distributed across the network, consuming less than 35% of total network airtime and allowing for additional network capacity of up to 5.5 Mbps for voice, video, and other IP data.

Jimi Henderson, Vice President of Sales at Silvus Technologies, commented: “We’re proud to help solve the Army’s Tactical Network challenges by supporting spectrum efficient Battalion Sized Flat Networks without sacrificing EW resiliency or capacity. The results of this demonstration are another key indicator that Silvus is pushing the limits, creating a massively scalable MANET Network that can deliver data connectivity to every soldier at the tactical edge.”