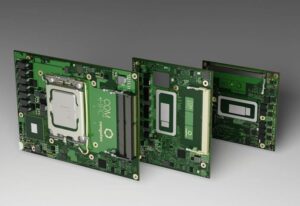 congatec has introduced seven lower-power variants of the 12th Generation Intel Core IOTG mobile processors (formerly codenamed Alder Lake) on 7 new COM-HPC and COM Express Computer-on-Modules each. Featuring the new Intel hybrid architecture with its mix of performance cores (P-cores) and efficient cores (E‑cores), the BGA-solderable processor variants consume just 15 to 28 W base power, which enables engineers to utilize them in fully passively cooled embedded and edge computing platforms. This eliminates the need for costly cooling options and improves the ruggedness and MTBF of system designs.

The lower energy consumption is mainly achieved by reducing the number of P-cores while maintaining the E-core count. For example, in the Intel Core i7 processor performance range, heterogenous workloads benefit from 8 efficient cores in all available variants and can scale down from 6 P-cores (12800HE/45 W base power) to either 4 (1270PE/28 W base power) or 2 P-cores (1265UE/ 15 W base power). Another power saving factor is less PCIe lanes (20 instead of 28). As selected processors are also suitable for hard real-time applications, support virtual machines and include Intel TCC and TSN support, these new congatec Computer-on-Modules ideal for consolidating a multitude of different heterogenous workloads including AI and/or immersive GUIs on one single passively cooled edge computing platform.

The feature set in detail

The new conga-HPC/cALP COM-HPC Client Size A modules (95x120mm), as well as the conga-TC670 COM Express Compact Type 6 modules (95x95mm) are available with 6 energy efficient 12th Gen Intel Core processors as well as a cost optimized Celeron processor. Both module families support up to 64 GB ultra-fast DDR5 SO-DIMM memory with 4,800 MT/s. Extraordinary graphics support for up to 4 independent displays and up to 8k resolution is provided by the integrated Intel Iris Xe graphics with the Intel Core i7 and i5 processors, and by the Intel UHD graphics with Intel Core i3 and Intel Celeron. To connect peripherals with massive bandwidth, the COM-HPC modules support up to 16 PCIe Gen 4 and 8 PCIe Gen 3 lanes, and additionally boast up to 2x Thunderbolt. The COM Express variants feature up to 8 PCIe Gen 4 and 8 PCIe Gen 3 lanes. Both support an optional and ultra-fast NVMe SSD. Further storage media can be connected via 2x SATA Gen 3. For networking, the COM-HPC module offers 2x 2.5 GbE, whereas the COM Express module executes 1x 2.5 GbE, with both supporting TSN. Sound is provided via SoundWire, HDO or I2S in the COM-HPC version, and HDA on the COM Express modules. Comprehensive board support packages are provided for all leading Real-Time Operating Systems, including hypervisor support from Real-Time Systems as well as Linux, Windows and Android.

The entire range of 12th Gen Intel Core processor based conga-TC670 COM Express Type 6 Compact modules (95x95mm) and the conga-HPC/cALP COM-HPC Client Size A modules (95x120mm) comprises 10 different configurations. For more detail about each of these, see the table on this page on congatec’s website.