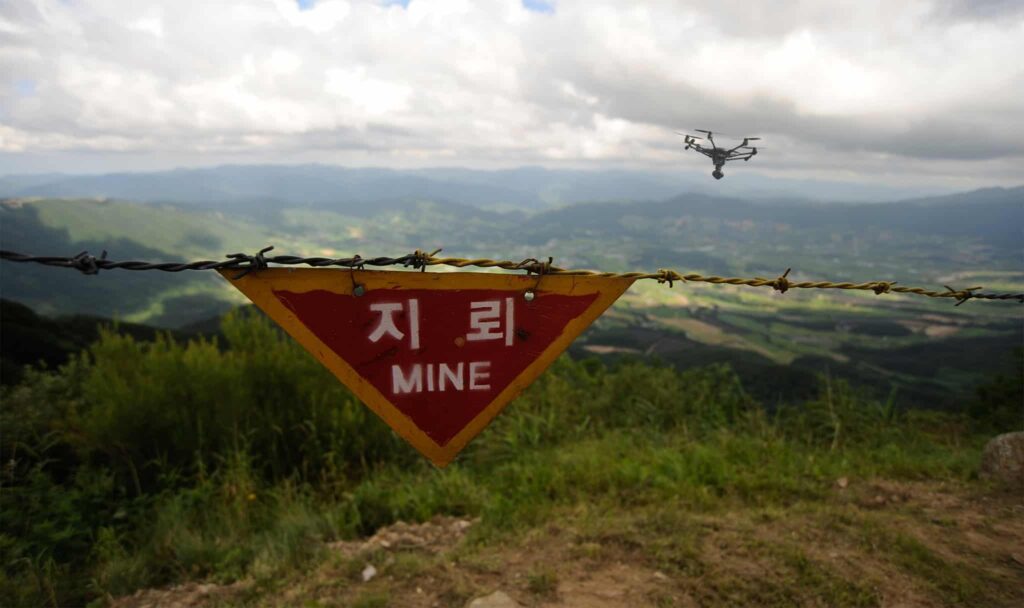 Iris Automation has released the following article explaining how UAS (unmanned aerial systems) are being used to detect landmines and other explosives in various conflict zones around the world, as well as how their Casia detect-and-avoid (DAA) systems can be used to give such drones an additional layer of risk mitigation.

In the 1980’s, over a million PFM-1 land mines were dropped into Afghanistan during the Soviet-Afghan War. These land mines have green ‘wings’ that allow them to flutter to the ground, easily detonate, and are mostly made of green plastic, making them both attractive to children and difficult to find with traditional mine detectors. More than 30,000 Afghanis have been killed or injured by these and other land mines and unexploded ordinance since 1978, and in recent years children have accounted for the majority of victims.

Made of plastic, metal, or other materials, mines contain explosives and sometimes pieces of shrapnel. A land mine blast can be fatal or cause injuries such as blindness, burns, damaged limbs, and shrapnel wounds.

There were at least 5,554 casualties of land mines in 2019 according to Landmine Monitor 2020. Civilians accounted for the vast majority of casualties (80%) and children represented nearly half of all civilian casualties (43%).

The Geneva International Centre for Humanitarian Demining (GICHD), which focuses on reducing risks caused by land mines, cluster munitions, and ammunition stockpiles, reports that as of January 2021, 55 states and five other areas have an identified threat of antipersonnel mine contamination.

In their equipment catalogue of anti-mine tools, GICHD lists Unmanned Aerial Systems (UAS) and Remote Operated Vehicles (ROV). It states, “UAS is used in various fields of Humanitarian Mine Action, such as mapping during Non-technical Survey. Currently, studies are being conducted on the use of metal detectors and ground penetrating radars (GPR) attached to drones.” Many such studies are being conducted globally, looking into the efficacy of various sensors and use cases.

Matt Wilson, Head of Operations at the Swiss Foundation for Mine Action (FSD), an organization that clears mines and other explosive remnants of war has stated that currently, “The best application for drones is by investigating the potential presence of explosive devices in a large location, which in the mine action jargon is called, “non-technical survey”…If the box can be refined and made more accurate, some areas can be discounted, making the area quicker (and cheaper) to be cleared subsequently.”

A November 2018 issue of the Journal of Conventional Weapons Destruction features a Case Study on the use of drones in mine clearance, “Enhancing Humanitarian Mine Action in Angola with High-Resolution UAS IM.” The article gives a thorough overview of potential and actual uses of drones in demining efforts. As part of the study, high-resolution imagery collected with UAS was used, in part, to:

A recent Bloomberg article illustrates the meaningful impact that these efforts have on communities, both in terms of reducing loss of life, but also how clearing land mines has great psychological benefits for those living in affected areas.

Thermal imagery shot from a drone reveals a mine hidden beneath vegetation in Angola. Photo: HALO Trust Credit: Bloomberg

An overview of the Workshop in a July 2020 issue of The Journal of Conventional Weapons Destruction. “During the workshop, mine action operators, technology developers, and researchers showed examples of how UAS can support mine action operations in the field. They presented innovative applications for close inspection, direct and indirect evidence detection, ground penetrating radar (GPR) potential, and the use of multispectral and hyperspectral sensors for evidence records.”

Case studies were presented where UAS have been used not only in Angola, but in Cambodia, Colombia, Georgia, Guinea-Bissau, Lao PDR, Somaliland, Sri Lanka, and the West Bank to “support various mine action activities, such as pre-deployment planning, remote monitoring of operations, terrain inspection, and impact assessment.” Additionally, a number of organizations and research institutions presented work on integrated remote sensing technologies, including both the potential applications of various sensors as well as manufacturing airframes with these sensors onboard.

Across the major institutions involved in demining, there is consensus that UAS are crucial components of current and future demining operations, particularly as these technologies and the regulations that govern them continue to develop. This work, and the drones that support it, are creating a world safer from weapons destruction, particularly for the civilians who continue to live on contaminated lands after the ravages of war.

How Iris Automation can help

Demining is an inherently dangerous operation. While UAS are improving the speed, cost, and efficacy of these efforts, they also introduce some potential risks themselves. Safety should be the main priority for any demining mission, and the Casia® product line of Detect-and-Avoid systems gives drones an essential layer of air risk mitigation. Casia is an onboard integrated computer vision system which provides robust situational information and intelligent decision-making in real time to avoid mid-air collisions. Casia improves the distance drones can be flown to limit human contact near potentially contaminated areas.

Additionally, Detect-and-Avoid systems fixed on the ground around the work area could provide a perimeter of sanitized airspace enabling safe UAS missions. These ground based surveillance systems would constantly monitor the airspace to detect potential mid-air collisions, alert the pilots in command of risk, and allow them to safely maneuver out of the potential intruder’s path either manually or autonomously.

To find out more about uses cases for drones integrated with Detect-and-Avoid technology, visit www.irisonboard.com/use-cases.