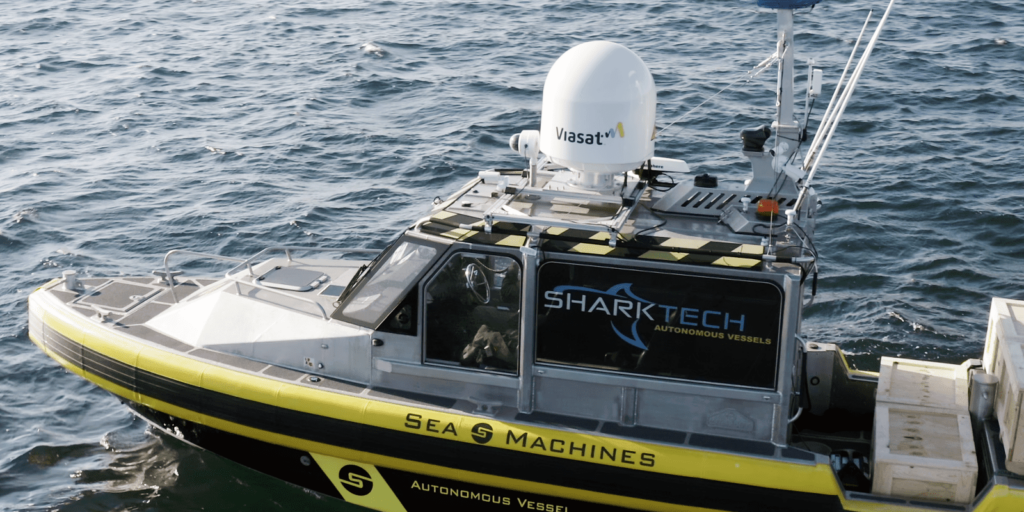 Sea Machines, a developer of marine control systems, has released the following article detailing how the company adds Viasat satellite connectivity to its retrofitted autonomous vessels for the defense market, in order to enable reliable contact with the operator from almost anywhere.

Viasat and Sea Machines are hosting a webinar that will provide more information on their capabilities and collaboration on July 27 at 8 a.m. PDT (11 a.m. EDT) – interested parties can register here.

Vessels without crews, from the Mary Celeste to the Flying Dutchman, are nautical legends and ghost stories. But the rise of robotics has made unmanned vessels a reality. Autonomous surface craft can perform a variety of missions and operations that spare human sailors from dull or dangerous tasks. The U.S. Navy, for example, has developed Sea Hunter, an experimental Unmanned Surface Vessel (USV) that can autonomously sail across thousands of miles of ocean while painstakingly tracking enemy submarines.

But, just like Unmanned Aerial Vehicles (UAVs), autonomous vessels require efficient and reliable communications to send and receive data and imagery, and to ensure that human controllers always have the option to be in the loop. That’s why Viasat is collaborating with Sea Machines Robotics, a pioneer in autonomous command and control and advanced perception systems for the marine and defense industries.

Many current USVs, such as Sea Hunter, were designed from the bottom-up to be crewless vessels. Understanding the time and cost required to build a USV, Sea Machines developed technology that transforms ordinary, crewed boats into autonomous vessels. The Sea Machines SM300, for example, can be retrofitted to nearly any existing vessel. The hardware includes a small control hub and antenna fitted to the vessel, and a laptop for the operator. The vessel can then be remotely controlled by the operator, who can change course and speed. Or, the vessels can perform missions autonomously, making the system ideal for patrol, survey and other missions.

Sea Machines’ autonomous control and perception technology vastly expands the pool of vessels that can be operated robotically, even if they were designed to be crewed. Operating close to land, these USVs can be easily controlled through a regular cellphone or laptop.

But what happens when a vessel ventures away from shore, out of the range of cell towers? That’s where Viasat’s global satellite communications (SATCOM) network comes in. The ViaSat-1 and ViaSat-2 satellites — which cover much of North America, the U.S. Gulf of Mexico, the Caribbean and routes across the Atlantic to Europe — will be joined by the three-satellite ViaSat-3 global constellation, with the first ViaSat-3 satellite targeted to launch in 2022. This planned global coverage will enable communication with and connectivity to unmanned ships sailing almost anywhere in the world — even in remote areas.

For example, a coastal application for this technology could be remote monitoring of a large harbor or port. An unmanned patrol boat outfitted with cameras could conduct a search pattern to detect anyone entering or leaving, communicating that information in real-time. Joe Johnson, business area director for rotary and maritime broadband services for Viasat Government Systems, noted the growing potential of autonomous robotics with effective satellite communications capabilities for defense customers.

Viasat and Sea Machines have already tested remote-controlled vessels in Boston Harbor. These capabilities are part of what will be demonstrated in the coming weeks – first at a joint Viasat-Sea Machines webinar July 27 and then onsite at the Navy League’s Sea, Air and Space expo Aug. 1-4.

Viasat’s satellite network is designed to address the problems of capacity density, in which a large amount of bandwidth — often in response to a sudden emergency or crisis — needs to be concentrated in a narrow geographic area. Viasat’s high-capacity Ka-band satellites can blanket an area with a great many small-diameter beams, creating enormous resilience against jamming. Equipped with a Viasat SATCOM terminal and operating over Viasat’s network, an automated vessel could rapidly transport data and share information, whether it’s communicating back to base or with a nearby ship.

Using a hybrid adaptive network approach, future autonomous defense vessels will be able to seamlessly shift across government and commercial networks to ensure the best available connection is being used. This type of network also makes it harder on adversaries looking to disrupt or intercept communications.

In addition to the resiliency a hybrid network can provide, Viasat’s network is backed by extensive cybersecurity infrastructure, including a 24/7 cyber security operations center staffed by analysts adept at detecting and neutralizing cyber threats.

“Ensuring cybersecurity is vital, because the last thing you want is a remote-control or unmanned vessel being hacked and turned into a weapon against you,” Johnson said.

Beyond-line-of-sight connectivity offers major advantages for USVs. Swarm boats, for example, are fleets of autonomous small vessels operating in coordination to blanket an area with sensors. These fleets can overwhelm and strategically outmaneuver a target without putting a crewed ship at risk. But the swarm concept depends upon reliable communications to enable autonomous vessels to exchange location and targeting data.

Viasat’s broadband SATCOM service can provide the necessary connectivity, even in remote or undeveloped regions where autonomous boats might be tasked with survey or patrol missions. Johnson also envisions the SATCOM and USV combination as useful for special forces operations using automated boats to conduct riverine reconnaissance, for example.

“In any operational environment, the more situational awareness you have the greater the likelihood of success,” he said. “USVs paired with reliable SATCOM capabilities could deliver intelligence that enables smarter decisions that enable operations and keep warfighters safe.”