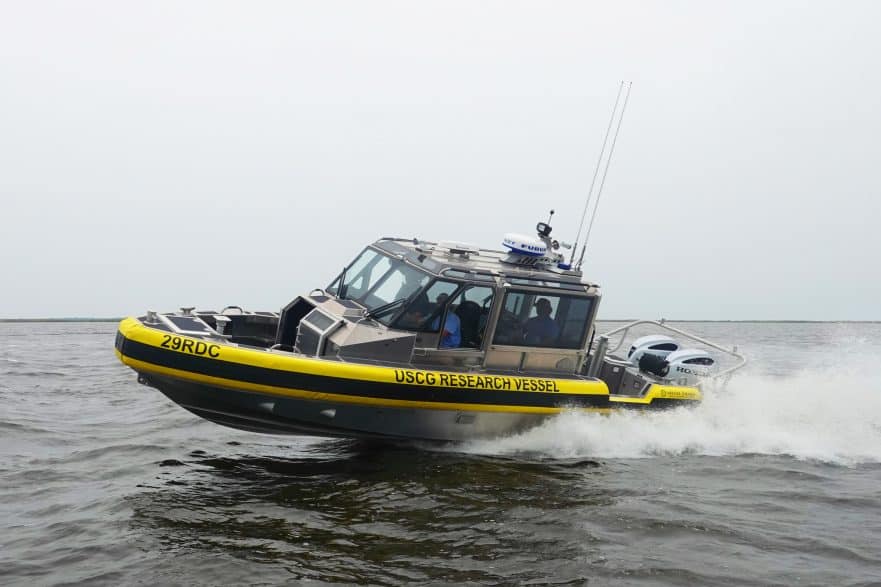 Sea Machines Robotics has partnered with shipbuilder Metal Shark Boats to supply the U.S. Coast Guard (USCG)’s Research and Development Center (RDC) with a new platform for testing and evaluating the capabilities of available autonomous vessel technology. Metal Shark’s Sharktech 29 Defiant boat has been converted to a USV (unmanned surface vessel) via the use of Sea Machines’ SM300 autonomous command and remote-helm control technology. The unmanned vessel will provide the USCG with a range of advanced capabilities including transit autonomy, collaborative autonomy, collision avoidance and remote vessel monitoring.

The RDC investigates innovative technologies and provides analysis and decision support to enhance operational performance across all Coast Guard missions. They will test and evaluate the Sharktech vessel’s autonomous capabilities for their potential in supporting USCG surveillance, interdiction, patrol and other missions. Following these tests, which will take place in Hawaii, the autonomous vessel will be returned to the RDC’s New London facility, where it will be used in additional testing to investigate application to various Coast Guard missions.

Derek Meier, assistant demonstration director at the USCG, commented: “As the premier USCG facility performing research, development, test and evaluation in support of the service’s major missions, the RDC team is eager to observe Sea Machines’ system in action. The exercises will ultimately help us determine how, when, and if this innovative technology can be used to support personnel who are executing a variety of Coast Guard activities.”

Phil Bourque, director of sales at Sea Machines, said: “Sea Machines is proud to actively support government agencies across a variety of projects and to expand that support to the Department of Homeland Security with this important demonstration being conducted by the U.S. Coast Guard. Our systems are being rapidly adopted by government and commercial operators alike, offering increases in on-water productivity and predictability, while reducing operational risk.”

Chris Allard, CEO of Metal Shark, stated: “Since the launch of our Sharktech Autonomous Vessels division in 2018 we have been working to position Metal Shark for the autonomy revolution. We are committed to the advancement of autonomous technology, through our relationships with leading autonomy suppliers as well as through our own R&D, and we are engaged with multiple customers, from the USCG, the Department of Defense and commercial operators. With this latest delivery, Metal Shark is proud to play a role in the Coast Guard’s autonomous technology R&D efforts.”