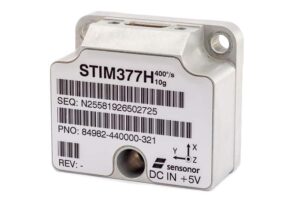 The new modules are housed in an aluminium enclosure, with SurTec650 surface treatment and a glass-to-metal sealed electrical Micro-D connector, as well as a laser-welded lid to ensure long-term hermetic operation. The design has been HTOL (high-temperature operating life) tested for a 20+ year lifespan, meeting the needs of the space industry and other applications that require exceptional long-term reliability and stability.

Modern innovations within the space industry have proved that small spacecraft can be launched at a fraction of the cost of traditional designs. Sensonor originally set out to make gyro and IMU modules according to best practices followed by the automotive industry, which emphasises high reliability and repeatability and low failure rates at low costs. The company initially targeted the defense and GNSS navigation industries with their first gyro product, which was then selected by NASA and other entities to be flown on several spacecraft technology evaluation missions. Following the success of these missions, Sensonor’s gyro became a commonly-used component by an increasing number of space technology companies for spacecraft attitude and orbit control systems (AOCS).

While these modules are commercial off-the-shelf (COTS) products and not space-qualified, Sensonor has carried out extensive radiation characterizations in conjunction with the Norwegian Space Agency and the Fraunhofer Institute to understand their capabilities, limitations and safe operating conditions in LEO (low Earth orbit) environments. This data is available on request from Sensonor or can be downloaded here.

The ITAR-free STIM277H and STIM377H are electrically and mechanically backward-compatible with Sensonor’s other IMU and gyro modules, allowing for easy and convenient integration into existing designs. The modules also include a range of features that can be configured by the customer.

Sensonor is currently building the first prototypes for IMU and gyro modules that will operate under even higher radiation levels while maintaining the same SWaP (size, weight and power) footprints. Radiation testing of these new designs is planned for early 2021, with a possible product being qualified for production in late 2022.