CR Flight has developed a revolutionary new motor technology for UAVs (unmanned aerial vehicles) that allows a single motor to drive counter-rotating propellers without using any gears. The Spirit series of drone motors is designed and manufactured in the United States, making it ideal for inclusion into UAV designs that will satisfy forthcoming legislation concerning foreign-made drones and components.

CR Flight’s motor design is based around a rotary transformer that drives both the rotor and the armature in opposite directions at the same time, transmitting power through the transformer. This allows the motors to run much cooler, as the rotating armature acts as an axial compressor, sucking air through the motor and providing increased cooling of the windings. 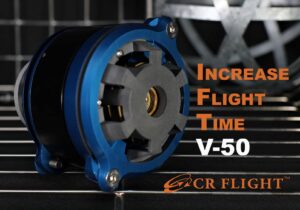 The new motors also provide a significant increase in thrust efficiency per watt, thus enabling a wide variety of new drone designs. The increased cooling allows the motors to be warrantied for 500 hours, and CR Flight believes that a 1000-hour TBO (time between overhaul) is possible, at which point the motors can be rebuilt at a fraction of their initial cost. This will translate to a lower overall cost for UAVs utilising the Spirit motors, giving them an advantage over other drone designs with motors that only last for around 50 hours.

Further products are also currently under development that will provide sustained thrust levels of 100 lbs and 220 lbs.