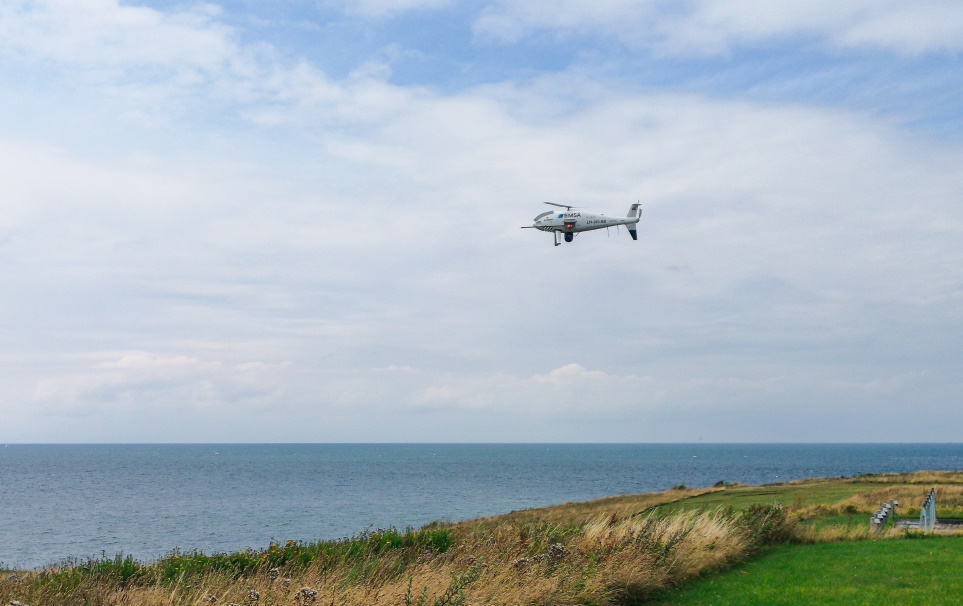 Schiebel’s CAMCOPTER S-100 unmanned aerial system (UAS) is being used to measure the sulphur emissions of ships in Danish waters to check compliance with the EU rules governing the sulphur content of marine fuels. Schiebel is working with partners Nordic Unmanned and NORCE Research Institute AS to support the Danish Maritime Authority (DMA) and the Danish Environmental Protection Agency (DEPA) in this operation.

The operation is taking place in the Great Belt, a strait between the Danish islands of Zealand and Funen, and is part of the Remotely Piloted Aircraft System (RPAS) services offered by the European Maritime Safety Agency (EMSA). Measurements taken by the CAMCOPTER S-100 are transmitted in real time to the EMSA RPAS Data Centre and to THETIS EU in Portugal, which creates alerts to be followed up by authorities.

The Schiebel CAMCOPTER S-100 UAS is an unmanned helicopter platform with a flight endurance of more than six hours and the ability to operate both during the day and at night. For this operation, it has been equipped with an Explicit mini sniffer sensor system, an L3 Wescam Electro-Optical / Infra-Red (EO/IR) camera gimbal, and an Automatic Identification System (AIS) receiver.

Hans Georg Schiebel, Chairman of the Schiebel Group, commented: “After our successful sulphur sniffing demonstration in January, we’re proud to be EMSA’s chosen UAS for these important and complex operations. It goes to show, that the maritime experience and pedigree of the CAMCOPTER S-100 is second to none.”

Knut Roar Wiig, CEO of Nordic Unmanned AS, said: “It’s great to be back in Denmark supporting Danish authorities in the prevention of marine air pollution. We are very impressed by the performance of the CAMCOPTER S-100 and its small and effective logistical footprint, in addition to the support from the Schiebel Group. Based on our team’s experience and track record, the BVLOS flight permit for this deployment in Denmark was secured in only a week’s time.”

Schiebel provides various maritime surveillance services for EMSA to several EU member states and EU bodies. Currently, the CAMCOPTER S-100 is also being deployed in the Republic of Croatia as well as Finland.