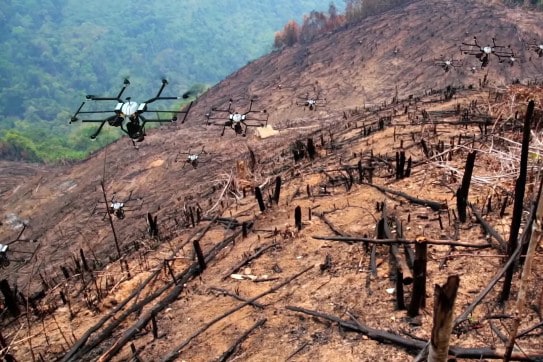 Doodle Labs’ Smart Radio Pro has been used to provide the communications architecture for a fleet of proprietary drones developed to replant deforested areas. Combating deforestation, the second leading cause of climate change, has been identified as one of the most promising and cost-effective ways of lowering greenhouse gas emissions.

ForestDrone [not the company’s actual name due to confidentiality reasons] has designed an unmanned aerial vehicle (UAV) that is capable of flying into challenging environments – including over wildfires – that are hard to reach for humans and vehicles such as trucks. The drone plants trees by flying at low altitudes and precisely firing seedlings into the ground.

The drone fleet uses LiDAR to map burned areas down to centimeter-level accuracy, and use this map to identify where to plant trees based on the best chance of successful growth, while maximizing for planting density. The swarm of up to 5 drones then autonomously flies low over the mapped area and fires the proprietary seedling packets into the pre-determined locations.

A significant challenge faced by ForestDrone was the maintaining of reliable data links between multiple aircraft to coordinate complex, precise missions over long distances. In addition to tree planting, these missions involve surveying and monitoring using high-resolution LIDAR and video, and fumigation. The drone data links needed to work reliably at distance, to provide meshing capabilities, and to not rely on cell service, which is unavailable in the regions that the drones operate.

The company selected Doodle Labs’ Smart Radio Pro after finding that many high-power radios struggled to attain the required range of at least 3 miles line-of-sight and the throughput to dependably stream LIDAR and HD video. Others met the requirements but were too expensive or too heavy to be suitable for use in this application. Radios with high size, weight and power (SWaP) requirements take a huge toll on battery life and therefore signficantly reduce flight times.

During testing of the Smart Radio Pro, ForestDrone’s engineers needed to ensure that their drones were able to maintain connectivity of at least 57 Kbps or faster speeds at a maximum distance of 3 miles. At that distance, the Smart Radio Pro version has a data rate up to 22 Mbps (and the higher end Smart Radio Xtreme goes up to 65 Mbps at the same distance).

Shortly after receiving the radios, the ForestDrone team completed successful initial testing of the radios, citing the ease of integration and the thoroughness of the supporting documentation. They decided to perform a full-scale integration trial with additional units in order to test the desired ground control/antenna mast/multi-vehicle configuration that would be used for commercial operations.

The Smart Radio exceeded the requirements for ForestDrone’s communications architecture, and the company decided to outfit their entire fleet, including retroactively installing the radios into older drones.

With its form-factor compatibility, the Smart Radio can be easily swapped out to operate at any frequency required by users, whether they are government agencies, NPOs, or private landowners.