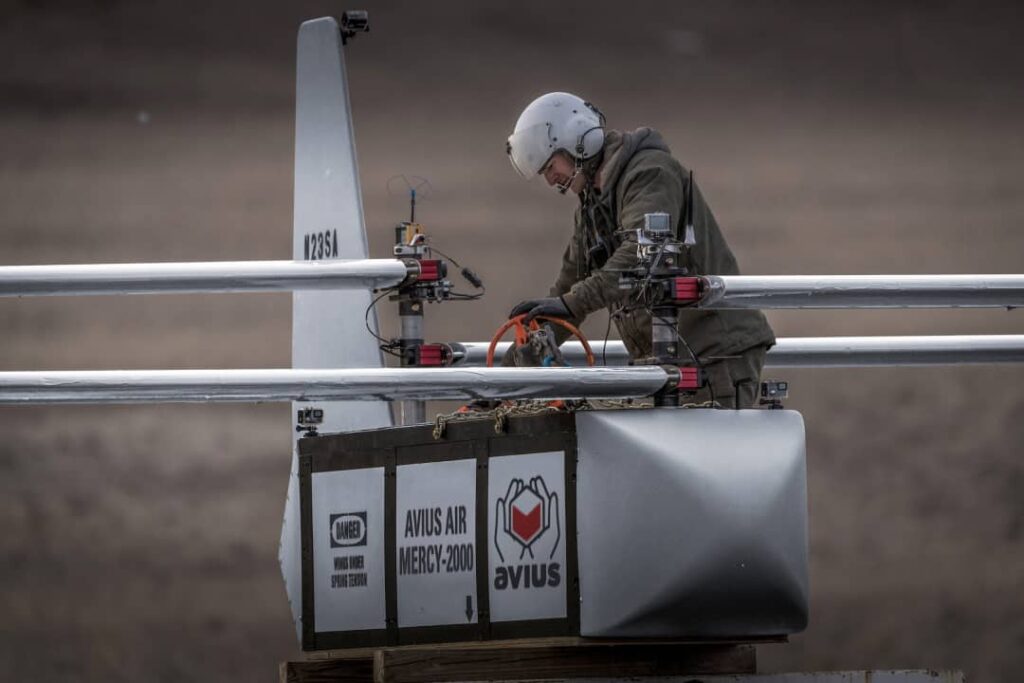 The AVIUS Air Delivery UAV, known as the Mercy-2000, is a single-use autonomous cargo delivery glider, deployed from fixed-wing aircraft or helicopter sling load, with the capability to immediately transport up to 1,600 pounds or 26 cubic feet of cargo.

The Mercy-2000 is being tested at the company’s flight test and qualification center at the Pendleton, Oregon UAS Test Range, where the UAV is lifted by a helicopter and dropped at a predetermined altitude. Following release, the on-board autonomous autopilot navigates the aircraft to a distant landing zone at an 8.4 to 1 glide ratio and executes an automated landing within 100 meters of the intended destination.

The Mercy-2000’s spring-open wing design also allow it to be carried inside narrow cargo transport aircraft and rotorcraft such as the C-17, C-130, CH-53, V-22, Caravan, Skyvan and others, where deployment from 25,000 feet results in the wings springing open to their 28-foot total wingspan, giving up to a 40-mile standoff distance.

Examples of cargo loads that the Mercy-2000 is capable of carrying include:

Chip Yates, CEO and founder of YEC, commented: “The entire YEC team is dedicated to preparing AVIUS Air Delivery for operational readiness in 2020 to provide heavy payload deliveries of vaccines and other critical medical supplies in accordance with the world’s new social distancing realities.”