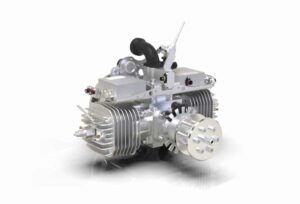 The new engine runs on a kerosene-oil mix of 50:1 using JET A, JET A1 or JP-8, and is based on a new approach to heavy fuel technology developed by Sky Power. A large number of components were newly developed for the design, including a new kerosene heating unit which jointly manages the startup process along with the engine management unit. Both systems communicate through the CAN-Bus Interface, with temperature control provided by sensors installed in the drive unit.

Karsten Schudt, CEO of Sky Power GmbH, commented: “For UAS operators, there are obvious benefits provided by this HF technology. The systems are very flexible and reliable and therefore reduce the operational cost.”