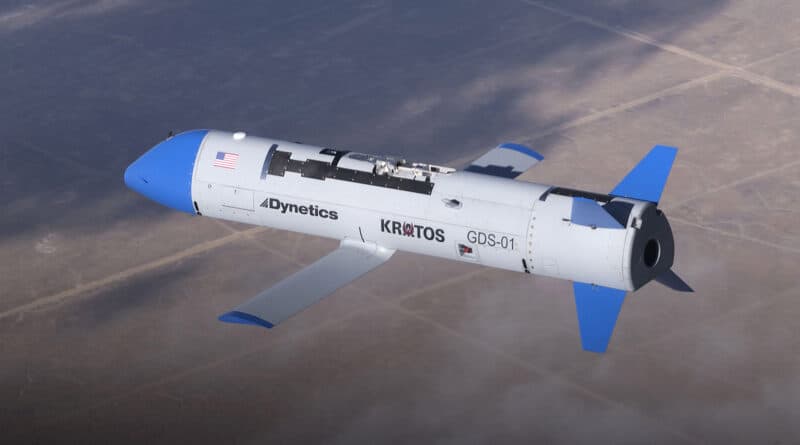 Dynetics has announced that its unmanned X-61A Gremlins Air Vehicle (GAV) has successfully undertaken its first flight. The X-61A is being developed for DARPA’s Gremlins program, which seeks to develop the capability to perform launch and recovery of volley quantities of low-cost, reusable unmanned aerial systems (UASs) in the air. This test represented the next step pf the program’s Phase 3 demonstration objectives, which will culminate in a final flight test to demonstrate the ability to recover four GAVs in under 30 minutes. Dynetics previously took part in the first two phases of the project and was named top performer for Phase 3.

The test, which took place at Dugway Proving Ground near Salt Lake City, Utah, involved launching the X-61A from a C-130A transport aircraft, followed by a 1 hour and 41 minute free flight. The test objectives included:

The test flight was performed as expected, achieving all test objectives that related to the aircraft’s operational system, and a drogue parachute was deployed in order to terminate the flight. During the ground recovery phase, the aircraft was lost due to a failure to extract the main parachute.

Tim Keeter, Dynetics Gremlins program manager, commented: “This flight marks a historic milestone for Dynetics and the Gremlins program. The GAV flew beautifully and our command and control system kept us in total control of the GAV for the entire flight. The loss of our vehicle validates our decision to build five GAVs for Phase 3; we still have four remaining. Overall, I am proud to see all the hard work pay off and we are excited to continue this momentum towards the first airborne recovery in early 2020.”

Brandon Hiller, chief engineer for the X-61A, stated: “This flight test validates all the engineering design work, analysis, and ground testing we have performed in the past two and a half years. We have a lot of confidence in the vehicle’s performance and overall design going forward, and the telemetry data from the flight compares exceptionally well to our modeling predictions. Our team has done a superb job to achieve first flight of this unique aircraft in such a short amount of time, and we are eager to get this new capability into the hands of the DoD.”