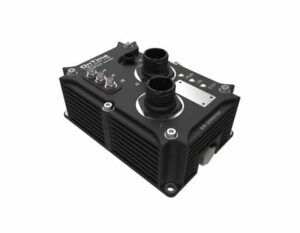 The unit’s integrated GNSS module supports GPS, BeiDou and GLONASS, and the receiver can receive and track up to three GNSS systems simultaneously. By default, the receiver is configured for concurrent GPS and GLONASS, including QZSS reception. The unit can also be synchronized by an external reference, such as an external GPS receiver, via NMEA telegram and PPS input or an IRIG-B DC input source. PPS output signals can also be provided via GPO pins in one of the Ethernet connectors when enabled as a GMC or when operating as a TC/SC, which allows the unit to operate as an edge device to bridge time from a network based timing system to legacy timing sources.

The unit weighs less than 2 lbs and has a typical power consumption of less than 15W. It is designed to meet the environmental requirements of RTCA/DO-160G and MIL-STD 810G as well as the EMI/EMC requirements of MIL-STD 461F and MIL-STD-704F. With small circular MIL connectors, extended temperature operation from -40 to +71C, and resistance to high shock/vibration, humidity, altitude, and dust/water ingress, the CM-4004F0-GMC-AERO is an extremely reliable and rugged solution for demanding environments.

Applications of the CM-4004F0-GMC-AERO for airborne, ground-based and sea-based unmanned systems include: