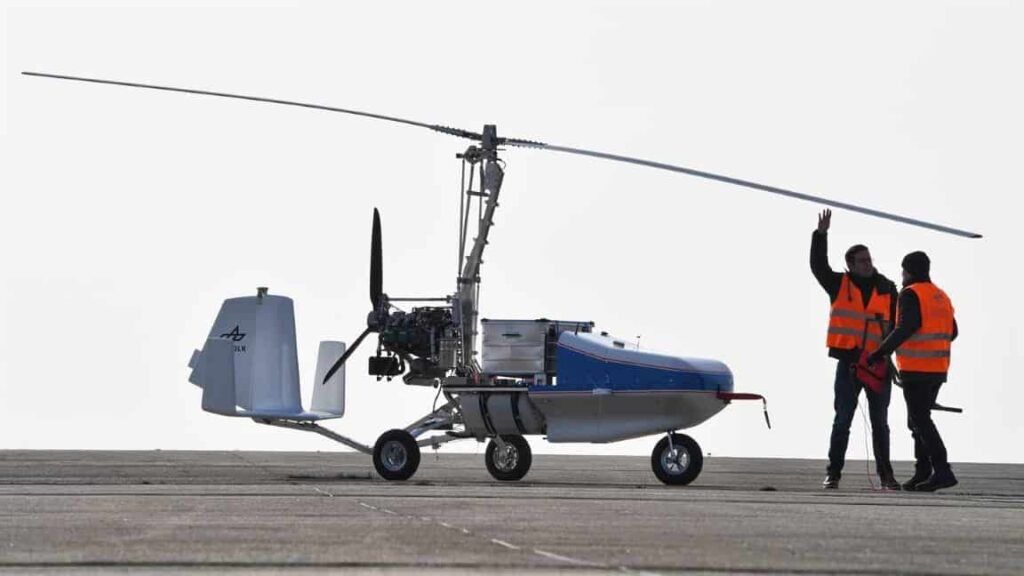 The German Aerospace Center (Deutsches Zentrum für Luft- und Raumfahrt; DLR) has announced that it is conducting research into automated, uncrewed air transport at low altitudes, as part of its ALAADy (Automated Low Altitude Air Delivery) system and ALAADy Demonstrator projects. As part of this research, transport of larger cargo items with a gyrocopter unmanned aerial vehicle (UAV) is being investigated. In the future, this may allow flexible, safe and cost-effective transport of important cargo such as humanitarian aid or urgently needed spare parts to the desired location.

“As part of DLR’s aeronautics research programme, we are developing and testing a demonstrator for uncrewed freight transport, thereby opening up the prospect of carrying loads of up to 200 kilograms for distances of up to 500 kilometres in lower-level airspace,” says Rolf Henke, Member of the DLR Executive Board responsible for Aeronautics Research. “Below normal air traffic, the concept allows for flexible operations on regional routes, away from populated areas.”

The uncrewed civilian aerial vehicle developed by DLR researchers working on the ALAADy Demonstrator project is one of the largest currently available. During the development of the ‘transport drone’, a 450-kilogram gyrocopter underwent extensive modifications, including the installation of a freight-carrying area. The aircraft has been retrofitted with sensors, actuators and a flight control computer, as well as other software and hardware for automated flight. “This technology demonstrator is ideally suited to validating the concepts developed at DLR for low-flying air transport with significantly higher payloads than those systems previously investigated,” says ALAADy Project Leader Johann Dauer from the DLR Institute of Flight Systems in Braunschweig.

During the current flight tests at the National Experimental Test Center for Unmanned Aircraft Systems in Cochstedt, the team of developers initially controlled the uncrewed gyrocopter manually via a radio link, as is common practice with model aircraft. This allowed all the safety measures and system components to be tested in actual flight, as well as proving the airworthiness of the newly developed transport drone.

“Gyrocopters have the particular advantage of being inherently safe,” says Sven Lorenz, who is leading the construction and trial operation of the technology demonstrator at the DLR Institute of Flight Systems. He went on to emphasise the benefits of the configuration: “This means that in the event of a failure, the free-spinning rotor enables a gentle landing, as occurs with a parachute.”

Several test flights have now been completed, in which the freight drone reached an altitude of up to 150 metres and travelled at speeds of approximately 100 kilometres per hour. “The test flights have already shown that gyrocopters are a suitable configuration for uncrewed air transport,” explains Lorenz. The manual flights are the initial phase of a development process that will incrementally automate the aircraft. Computers are gradually taking over all of the tasks that would otherwise have to be performed by a person within the aircraft or on the ground. “The next step is for the uncrewed gyrocopter to make its first automated flight,” says Lorenz. “We are currently developing automatic flight control functions for all phases of flight: taxiing, take-off, cruise and landing.”

The findings from the project and the flight test are important building blocks for operating uncrewed aircraft of this size cost-effectively and safely, outside the existing restricted areas. “Integration into a logistics chain, operational risk assessments, automatic monitoring of system status with a safety monitor and the development of risk reduction strategies are further goals of DLR research in the fields of uncrewed, low-level air transport,” explains Johann Dauer.

The DLR ALAADy demonstrator project focuses on the construction and testing of an uncrewed, automated flight test vehicle based on a gyrocopter. A particular challenge in the modification of the software and hardware for the automated flight system lay in the design of the actuators, for example for controlling the throttle or the roll and pitch angle of the rotor head. Since standard actuators available on the market did not meet the special requirements for controlling the uncrewed cargo transporter, the DLR researchers developed actuators specially adapted for the ALAADy demonstrator. Initial flight tests have been being carried out since 2018 and the automation of flight procedures is currently being developed in stages. In addition, researchers are working to clarify the legal constraints on the operation of uncrewed flight test vehicles of this class. In doing so, they hope to determine how uncrewed drones can be integrated into standard airfreight chains.

Since 2016, as part of the ALAADy project, DLR researchers have also been examining the economics of uncrewed freight transport, as well as identifying upcoming challenges and potential areas of application. Such research is laying the foundations of the demonstration project. The aim of this part of the project is to develop potential strategies to mitigate the risks associated with uncrewed flight operations. These may include the use of flight restrictions such as, for instance, using low flight altitudes and avoiding densely populated areas. Theoretical research has been completed on payloads of up to one tonne. In addition, market analysis has been conducted to define the scenarios in which such an approach might be economically viable. Aircraft configurations and ways of integrating them into the existing air traffic system have also been investigated.