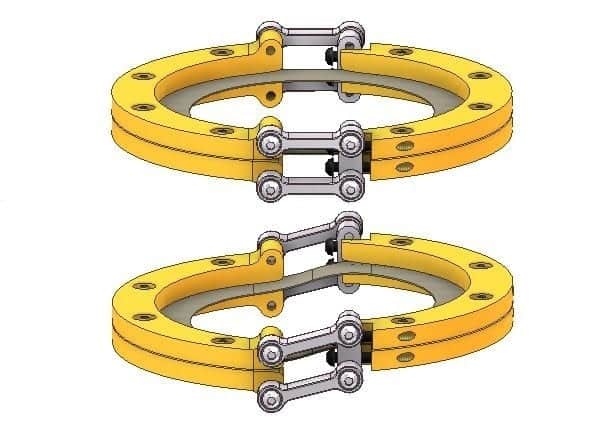 Blainjett Aviation has announced that it has developed a new propeller technology, called dynamic-variable-pitch, that will make both manned and unmanned vertical take-off and landing (VTOL) aircraft fly faster and more efficiently. In addition, the company also envisions new types of aircraft utilizing the propeller technology. These include a quadcopter with forward facing rotors, a thrust vectoring short takeoff and landing (STOL) airplane and a single rotor compound helicopter.

Dynamic-variable-pitch is based on a flexible cam made of flex-steel and other unique components that mate to a propeller or rotor system. The cam vectors thrust and counters dissymmetry of lift. A benefit of thrust-vectoring is the ability to take-off and land without a runway. Blainjett Aviation’s technology does this while avoiding some of the drawbacks of other systems. This cam can also counter dissymmetry of lift, stabilizing a helicopter in forward flight, increasing the velocity never exceed (VNE) speed.

The thrust-vectoring function utilizes the flexible cam for control of the propellers to guide the airflow. This allows quadcopters to take off and land and fly forward without tilting the rotor system or the fuselage. The forward facing rotors can take advantage of variable pitch and the addition of wings to generate higher speeds, more efficiently.

Blainjett Aviation believes this new dynamic-variable-pitch cam mated to a helicopter rotor system and swashplate can more effectively counter an aerodynamic limitation called dissymmetry of lift. This phenomenon is the main limiting factor in a helicopter’s top speed. Data from Blainjett’s proof of concept prototype showed a significant improvement of 75%, with a 125% improvement projected in future testing.

Until now, variable pitch and cyclic pitch systems were the only available options for VTOL aircraft and helicopters. Blainjett hopes to attract interest from the growing UAV and manned VTOL markets where they believe companies could use this technology to differentiate themselves. Patents are either allowed or pending in the US and abroad.