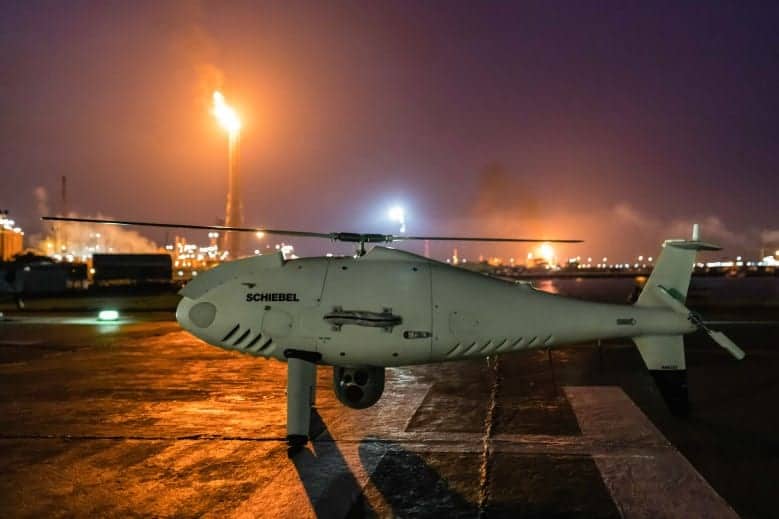 Schiebel has announced that its CAMCOPTER S-100 Unmanned Aerial System (UAS) has demonstrated its capabilities to a large European oil and gas corporation during demanding trials in Rivers State, Nigeria.

The international oil and gas industry has shown increasing interest in employing UAS to effectively monitor and control oil and gas infrastructure, both onshore and offshore. Therefore, the latest flight trials with the CAMCOPTER S-100 around the coast of Rivers State were designed to further investigate the implementation and potential advantages of UAS technology. Representatives of the Nigerian Civil Aviation Authority, the Nigerian Air Force, the Nigerian Navy, the Nigerian Army, Kongsberg Geospatial and local UAS service provider Aerial Robotix, among others, attended the event.

“We were approached by one of our clients to carry out proof of concept BVLOS trials in Nigeria with a proven, reliable UAS that could safely carry the client’s payload,” said Tudor Moss of Aerial Robotix. “It quickly became clear to us that the Schiebel CAMCOPTER S-100 was the best choice because of its unsurpassed capabilities and track record. Thanks to the S-100 and the support of the Schiebel team, we were able to deliver the project safely and successfully.”

“Monitoring and maintaining remote oil and gas facilities is a challenging and dangerous task that can derive considerable benefits and cost-savings from the use of unmanned systems,” notes Hans Georg Schiebel, Chairman of the Schiebel Group. “As a proven and reliable platform, the CAMCOPTER S-100 is perfectly suited for supporting key aspects such as infrastructure inspections, emergency response, security and surveillance.”

Watch a video of the trials below: