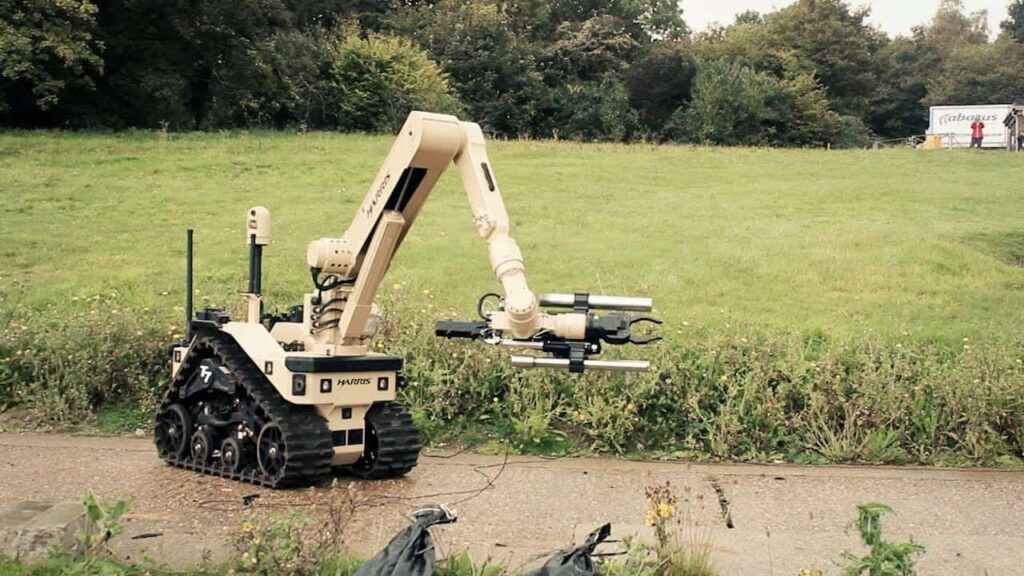 The UK Ministry of Defence has announced that the British Army have taken delivery of the first four of 56 new bomb disposal robots following rigorous trials. The Harris Corporation’s T7 unmanned ground vehicles (UGV) are equipped with high-definition cameras, high-speed datalinks, an adjustable manipulation arm, and tough all-terrain treads, allowing them to neutralise a wide range of explosive threats.

The bomb disposal platform endured a variety of tests during an eight-week ‘acceptance’ trials period at UK and US sites specifically chosen to put the robots through their paces. The systems were pushed to their limits by trials including multi-terrain driving, a series of battlefield missions, weightlifting and dexterity tasks, climatic and vibration testing, high stress capabilities, live-firings, maximum traversing angles and interoperability assessments.

Defence Secretary Gavin Williamson said: “These robots will go on to be an essential piece of kit, preventing harm to innocent civilians and the brave operators who make explosives safe. The robots will provide the Army with the latest bomb-disposal technology and will prove to be trusted companions both on UK streets and in deadly conflict zones.”

Col Zac Scott, Head of the Defence EOD & Search Branch said: “Remote Control Vehicles (RCVs) are critical to the safe conduct of Explosive Ordnance Disposal (EOD) tasks. The Harris T7 harnesses cutting-edge technology to provide EOD operators with unprecedented levels of mobility and dexterity. It represents a step-change in capability for our service personnel and it will save lives.”

The bomb disposal robots have been procured by Defence Equipment and Support, the MOD’s procurement organisation, under Project Starter. The deal was originally announced at the 2017 Defence and Security Equipment International (DSEI) Exhibition in London.

Project Starter will procure 56 Harris T7s to support Explosive Ordnance Disposal (EOD) teams. The programme is designed to replace the Army’s fleet of Wheelbarrow Mk8B remote-controlled EOD robots which have been used across the globe by UK Armed Forces since 1972.

Lt Col Thornton Daryl Hirst, Section Head of Remote Controlled Vehicles within DE&S’ Special Projects Search and Countermeasures team, said: “The first four production standard vehicles have been delivered early to the British Army enabling us to conduct train-the-trainer packages from January onwards. The hard work and dedication of my team has helped ensure that this critical project has run to time and cost and the trials exceeded our performance expectations.”

The Harris T7s robots use advanced haptic feedback to allow operators to ‘feel’ their way through the intricate process of disarming from a safe distance, protecting UK soldiers from threats such as roadside bombs. The haptic feedback function is designed to provide operators with human-like dexterity while they operate the robot’s arm using the remote-control handgrip. The unit gives the operator physical feedback, allowing intuitive detailed control.

All 56 robots are due to be delivered to the UK and in service by December 2020.