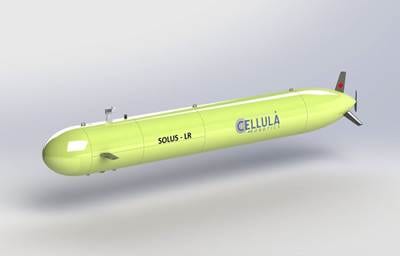 Cellula Robotics has announced that it has been given the approval to proceed with phase 3 of a contract by Public Services and Procurement Canada, on behalf of the Department of National Defence’s (DND) science and technology organization, Defence Research and Development Canada (DRDC), under the All Domain Situational Awareness (ADSA) Science & Technology (S&T) Program. Under Phase 3, Cellula will develop and build a long range Unmanned Underwater Vehicle (UUV). The UUV will incorporate a fuel cell power pack and suction anchor. Known as Solus-LR, the UUV will have a target range of 2000 km and is designed to stay submerged for multi-month missions.

Cellula has recently completed the Solus-LR preliminary design review and is proceeding with the critical design phase. Technology and lessons learnt from the previously announced Fuel Cell and Suction Anchor phases will be further developed and implemented in this project.

The design phase will continue into early 2019 followed by the build and factory testing. Sea trials and a capabilities demonstration in Indian Arm, British Columbia, will be concluded by April 2020.