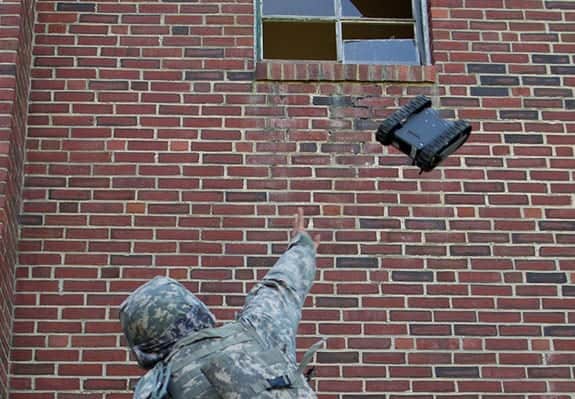 Endeavor Robotics has announced that it has been awarded a $10 million contract by the U.S. Marine Corps for the company’s lightweight FirstLook unmanned ground vehicles (UGVs).

This latest award for a large number of FirstLooks follows two contracts worth more than $24 million Endeavor recently captured to supply the Marines with the company’s ‘back-packable’ robot.

More than 1,000 FirstLook robots have been fielded worldwide to military, law enforcement and industrial customers. The five-pound, throwable FirstLook can be dropped roughly 20 feet onto concrete without sustaining damage. It is often used to clear buildings, detect IEDs, and navigate confined spaces like caves, tunnels and crawl spaces. Day/night cameras and two-way audio allow the FirstLook to act as ‘eyes and ears,’ giving operators greater stand-off distance from potential threats. FirstLook also can climb over seven-inch obstacles and automatically rights itself when flipped over.

“We’re proud the Marines have chosen Endeavor’s FirstLook to complement the midsize SUGVs already on order. Whatever their mission or choice of robot, these two technology solutions help the Corps keep Marines out of harm’s way while accomplishing their combat duties,” Frost added.