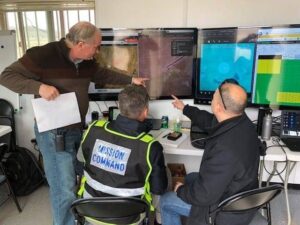 The Nevada Institute for Autonomous Systems (NIAS) has announced that, along with its NASA Unmanned Traffic Management (UTM) partners, it has flown multiple Unmanned Aerial Systems (UAS) over a week-long TCL 3 testing period at the Nevada UAS Test Site at the Reno-Stead Airport. The testing focused on airspace management technologies that will enable the safe integration of UAS into the National Airspace System (NAS).

On media day, a team from the Reno Fire Department simulated an incident with a victim experiencing severe blood loss and who needed an immediate transfusion. A multi-rotor UAS from Drone America was equipped with a container which held an actual packet of blood to be transported via drone in Nevada.

High winds and frigid temperatures tested both the drone and those on the ground, but the drone successfully landed in the designated landing area so that firefighters could retrieve the blood packet and begin the faux-transfusion.

The partners not only demonstrated drone flight capability, but also tested UAS traffic mapping, sensor and radar technology all of which were connected through a NASA UAS Service Supplier (USS) network to NASA Ames.

“Advanced flight and highly technical scenarios like drone detection, surveillance of critical infrastructure, aerial package delivery of critical first responder medical supplies, to the important NASA data interoperability protocols that will eventually form the backbone of the UTM system, we focused heavily on communications, navigation, and surveillance to produce critical data for the NASA TCL 3 Campaign,” said Dr. Chris Walach, the Senior Director of NIAS and the FAA-designated Nevada UAS Test Site. “Our Nevada teammates did an amazing job working together to successfully complete the first series of major testing for NASA’s TCL 3 Campaign,” said Walach.

“NASA, the FAA, and its partners including NIAS, are working diligently to extend many of the beneficial applications of small UAS beyond the current limitations in an environment that embraces innovation and industry growth while respecting aviation safety traditions,” said Arwa Aweiss, NASA’s UTM TCL3 Flight Test Director.