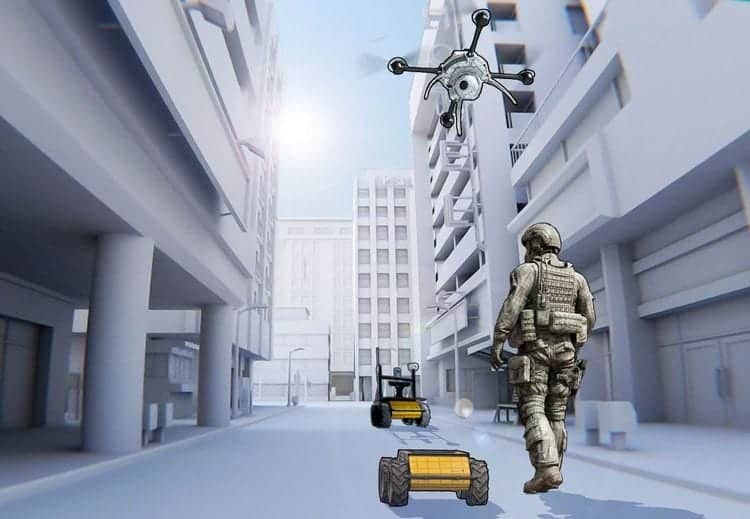 Northrop Grumman Corporation has announced that it has been selected by the Defense Advanced Research Projects Agency (DARPA) as a Phase 1 Swarm Systems Integrator for the Agency’s OFFensive Swarm-Enabled Tactics (OFFSET) program. As part of the program, Northrop Grumman will launch its first open architecture test bed and is seeking participants to create and test their own swarm-based tactics on the platform. Northrop Grumman is teamed with Intelligent Automation, Inc. (IAI) and the Interactive Computing Experiences Research Cluster, directed by Dr. Joseph LaViola at the University of Central Florida.

The goal of the OFFSET program is to provide small-unit infantry forces with small unmanned aircraft systems (UAS) or small unmanned ground vehicles (UGvs) in swarms of 250 or more robots that support diverse missions in complex urban environments. OFFSET seeks to advance the integration of modern swarm tactics and leverage emerging technologies in swarm autonomy and human-swarm teaming.

As part of the DARPA OFFSET program, Northrop Grumman serves as a swarm systems integrator, tasked with designing, developing and deploying a swarm-system, open-based architecture for swarm technologies in both a game-based environment and physical test bed. The team has been tasked to produce tactics and technologies to test on the architecture and is responsible for engaging a wider development and user audience through rapid technology-development exercises known as “swarm sprints.”

Approximately every six months, DARPA plans to solicit proposals from potential “sprinters” in one of five thrust areas: swarm tactics, swarm autonomy, human-swarm teaming, virtual environment and physical test bed. Participants from academia, small business and large corporations are invited to join in these swarm sprints. Sprinters will work with the integration team to create and test their own novel swarm tactics within the test bed environment. The end of each sprint will coincide with live physical test experiments with DARPA, the systems integrator team and other sprinters.

“Cognitive autonomy has the potential to transform all defense and security systems. OFFSET will explore a variety of applications in relevant mission scenarios,” said Vern Boyle, vice president, advanced technologies, Northrop Grumman Mission Systems. “We are applying cutting-edge technologies in robotics, robot autonomy, machine learning and swarm control to ultimately enhance our contributions to the warfighter.”