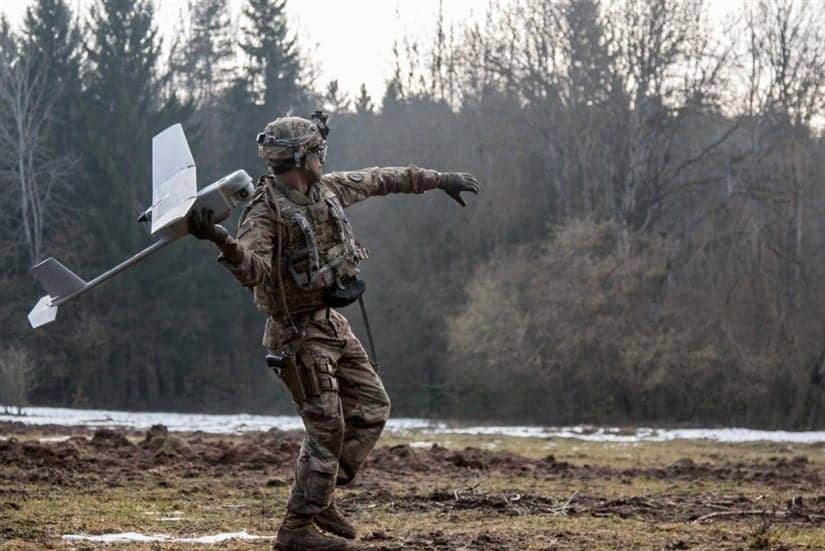 Soldiers who operate the Raven go through a training course that teaches them how to conduct day and night operations with the equipment as well as how to perform basic maintenance on the system.

“I went through the training back in Fort Riley, Kansas,” said Army Spc. William Ritter, a military policeman with the 287th MP Company.

Ritter and other soldiers in his unit are taking their knowledge learned from their training and applying it to the simulated situational training exercises they are conducting in Hohenfels.

“Being able to use the system during Allied Spirit is a great advantage,” Ritter said. “I am able to identify possible hazards or threats in the area almost instantly.”

Allied Spirit immerses soldiers into a combat-like environment by having them face difficult challenges they might see when deployed in a combat area. Some of the threats the soldiers face include small-arms fire, enemy artillery, enemy surveillance, as well as having to seize enemy-held villages that have civilians.

The Raven system provides soldiers with the ability to view opposing forces, OPFOR, in their areas of operation. OPFOR are soldiers who play the role of the enemy for units conducting training at Hohenfels Training Area. The OPFOR provide units an experience as close to real combat as possible.

“Having the ability to assess the terrain and situation before exposing troops to hazards is essential,” said Army Sgt. 1st Class Joseph Rombold, a mentor for troops going through the training. “With the Raven system, you are able to locate and follow high-value targets from a distance without exposing yourself, giving you an advantage and the element of surprise.”

The Raven system is designed for rapid deployment and high mobility. At just over four pounds, its lightweight frame makes transport easy for ground troops. The sUAS has a range up to 10 kilometers from its launch point.

“Once I launch the Raven into the air, it takes off,” Ritter said. “I am able to control it and see where it’s going through a remote control with a screen on it, showing me everything the Raven sees. No matter if its day or night, with the Raven, if there’s a threat, I’ll be able to see it.”