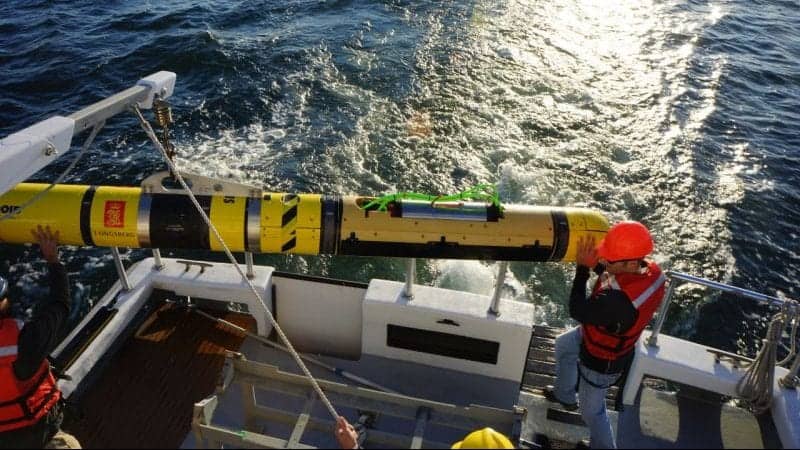 Kraken Robotic Systems Inc., a wholly-owned subsidiary of Kraken Robotics Inc., has completed development of a real-time Synthetic Aperture Sonar (“SAS”) system that has been successfully integrated and tested onboard a US Navy REMUS 600 Autonomous Underwater Vehicle (AUV) operated by the Naval Undersea Warfare Center in Rhode Island.

“Kraken is proud to have developed an AUV solution for real-time, ultra high-resolution imaging and 3D mapping of the seafloor,” said Karl Kenny, Kraken’s President and CEO.

“We expect this technology will revolutionize the way in which big data from Synthetic Aperture Sonar imagery and bathymetry is processed. We would like to extend our thanks and appreciation to our colleagues at the Naval Undersea Warfare Center for their support in deployment and testing of our solution on their REMUS 600 AUV.”

The AquaPix® MINSAS Synthetic Aperture Sonar features real-time processing; this allows for the creation of detailed acoustic images which can be analysed on-the-fly by the AUV’s onboard computers to enable the vehicle to make enhanced decisions on the best way to continue the mission. This acquisition and processing of high resolution raw data can increase the speed and accuracy of maritime missions – particularly autonomous AUV minehunting where large search areas must be covered in high tempo.

Mr. Kenny went on to say, “The major concern of mine countermeasures is to keep sailors far away from the mine threat while having a high level of confidence in the detection and classification of possible threats. Real-time SAS signal processing onboard an AUV is a significant step forward from the current approach. Kraken’s real-time SAS can increase safety, improve operational efficiency, reduce the mission risk of missing mines and significantly reduce and/or eliminate post mission analysis time.”

At least 5cm of target pixel resolution is required for effective minehunting. This can be achieved with Synthetic Aperture Sonar (SAS) to ranges of over 250 metres. While conventional side scan sonars can also achieve this resolution, they can only do so at very short range, typically limited to less than 25 metres. This range limitation has a direct effect on search times and results in very inefficient area coverage rates.

Synthetic Aperture Sonar can provide up to 10 times the range and area coverage rates of conventional side scan sonar. SAS is particularly well suited for AUVs and industry experts predict that SAS will replace conventional side scan sonars for many military applications. SAS technology also has significant potential in other underwater imaging applications including offshore energy, seabed surveying, marine archaeology, debris mapping and search and salvage operations.