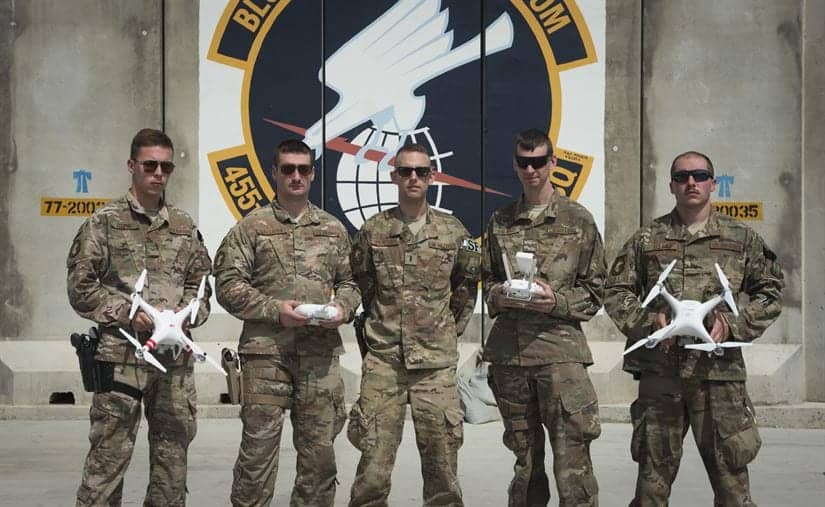 The U.S. Air Force has announced that its 455th Expeditionary Security Forces Squadron has teamed up with a researcher from the Air Force Research Lab to teach airmen how to pilot drones and use them to train coalition forces on how to react to them on the battlefield.

“This is a brand new program for the wing, where we are able to test our counter-UAS systems coming into [Bagram Airfield], in addition to running base-wide exercises,” said Air Force 1st Lieutenant Ryan Wilkerson, a researcher attached to the 455th ESFS.

Wilkerson is deployed out of the AFRL, Rome Research Site, New York, and came to Bagram, where the challenge is present in real-world scenarios, to test the program. A few airmen assisted Wilkerson by serving as drone pilots and using their own down time to practice piloting and learn tactics the enemy may use.

“It’s exciting to be able to pilot these aircraft for a program no one has ever been a part of before,” said Air Force Senior Airman Christopher Gallman, with the 455th ESFS joint defense operations center. “I can’t wait to see where it is going and to be able to help out the total force.”

“It’s fun and enjoyable to do, and knowing how beneficial it is to not only the base, but all of the force, makes it worth doing,” Gallman continued.

Though service members train to deploy, training still continues while they’re on deployment.

“This allows us to be better prepared,” Wilkerson said. “The best way to train is to actually put something in the air and see how people react. We train how we fight, so this is the most efficient way to counter this growing concern amongst coalition partners.”

Tactics used by the enemy are constantly evolving, which is why airmen must constantly adapt to face new threats head-on, and be ready to engage anything that they might encounter on the battlefield.