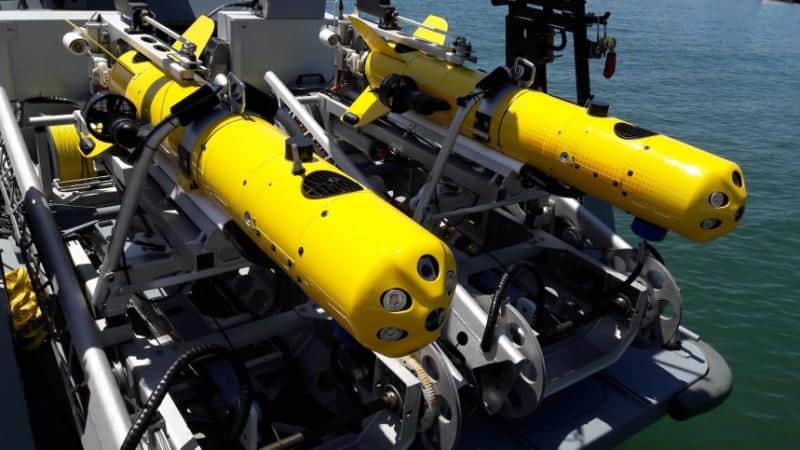 ECA Group has announced that it has demonstrated the capability to simultaneously deploy its AUVs (Autonomous Underwater Vehicles), USVs (Unmanned Surface Vessels) and ROVs (Remotely Operated Vehicles) to perform parallel and collaborative detection and identification of mines during Mine Counter Measures (MCM) operations. The demonstration was performed for the Belgian Navy, which is currently undergoing evaluation of unmanned maritime systems.

Legacy MCM operations, as performed since the 1970s, have consisted of employing a dedicated minehunter equipped with dual frequency hull-mounted sonar for detection and classification of sea-bottom objects, and ROVs for identification and neutralization. With the recent evolutions in drone technology enabling the systems to collaborate and become more autonomous even in complex missions and to have increased operability distance, MCM operations are now moving to multi-type unmanned platform swarms, thus increasing the capabilities of a single support ship whilst reducing the time of operation and ensuring crew safety.

In the harsh subsea conditions of the North Sea, including poor visibility and strong currents, ECA Group deployed an Unmanned MCM Integrated System (UMIS) composed of an A9-M AUV and an INSPECTOR USV with two SEASCAN MK2 ROVs from the Coastal Patrol Vessel (CPV Pollux) of the Belgian Navy. In parallel, another of ECA’s AUVs, the long range A27-M, was also operated from the same CPV with the support of ECA Group personnel.

This set of vehicles was deployed within an evaluation area for a predefined MCM mission. Through its radio and acoustic communication links, ECA was able to demonstrate the capability to operate in parallel, with real-time cooperative actions between a large number of unmanned vehicles while operators remained aboard the CPV in a safe zone several kilometers outside of the mine field. After only a few minutes the first contact snapshots automatically generated by the Automatic Target Detection software in the AUV A9-M and relayed by the USV were received on the CPV and the classification process could begin immediately while the AUV continued its survey mission following a subsea preprogrammed pattern.

The USV INSPECTOR was immediately sent to the locations of the shortlisted classified objects of interest in order to deploy the SEASCAN inspection vehicle. This ROV was remotely operated using the subsea optical fiber from the USV and the latter’s radio link to the operator aboard the CPV in order to carry out the final visual camera identification.

All the collected data from this operation is to be examined by the Belgian Navy in order to evaluate the performances of the ECA unmanned MCM integrated system. This mission allowed ECA to gain valuable experience in real operational conditions and was a great opportunity for the Belgian Navy to test the latest operational MCM concepts.