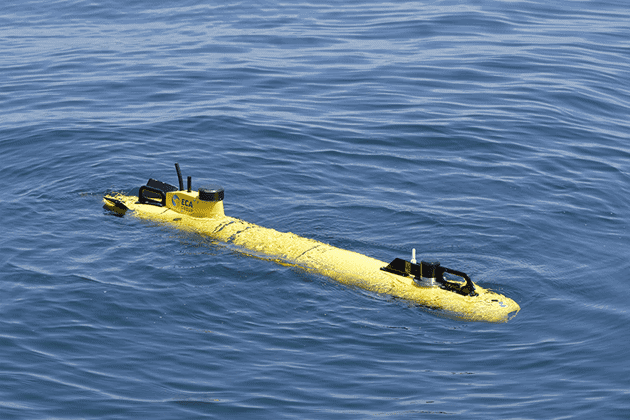 ECA Group has announced that it has successfully demonstrated new advanced robotic features on an experimental version of its A9-E AUV (autonomous underwater vehicle). The AUV had been specially modified for the SWARMS project, an EU-funded directive to develop new technologies for underwater robotics. The modifications included an extra acoustic modem with network protocols from Evologics fitted in a modified front payload section, and an additional advanced autonomy interface with on-board computing capabilities.

The new modem allowed for the inclusion of the experimental A9-E AUV within a multiple access-capable underwater communication network. While ECA Group routinely uses underwater communications for mission monitoring and control, these have been mostly point to point until now. The use of a multiple access acoustic network deconflicts the use of multiple vehicles operating in the same area. Using an unmanned surface vehicle (USV) as a WiFi and RF gateway, a status vector including AUV position, speed, etc was successfully displayed on the topside SWARMS multi-vehicle mission management tool.

The advanced autonomy interface was developed to allow mission parameters to be adapted on the fly. In previous modes of operation, only a pre-programmed mission plan was usually executed. To test this new capability, real-time quality analysis and control of a bathymetric survey conducted using a COTS Klein 3500 interferometric side-looking sonar was demonstrated. A quality factor was extracted in real-time, on-board the experimental A9-E, from the raw sonar data. This quality factor measures the interferometric baseline decorrelation, which can result from many factors including reduced signal to noise, or multipath interference in shallow water, and degrades the accuracy of the depth soundings. The quality factor measurement was used to adapt the altitude of the survey between 4m and 6m (water depth varied from 5m to 8m over the test area) to minimize the baseline decorrelation and therefore increase the accuracy of the soundings.

ECA Group’s demonstration was held in the access channel to the Black Sea port of Mangalia, Romania.