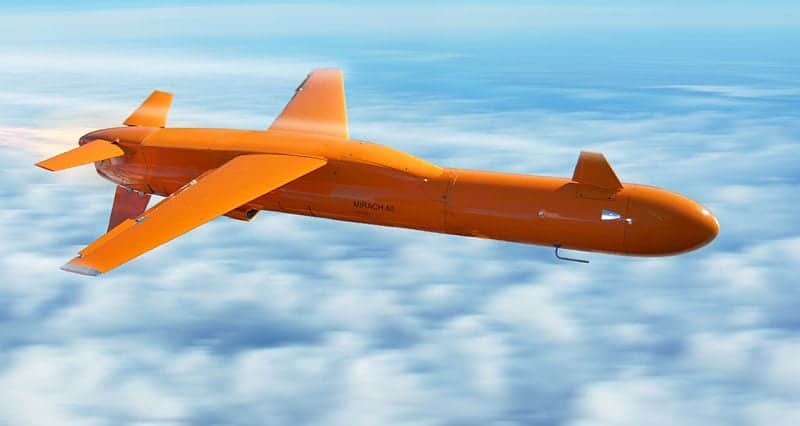 Leonardo has announced the introduction of its new aerial target drone at the 2017 Paris Air Show. Based on the company’s experience with its Mirach 100/5 target drone, which is used as the standard threat simulator by various international Armed Forces, the new Mirach 40 (M-40) is designed to provide medium-to-high target drone performance.

The M-40 is a remotely-piloted aerial system (RPAS) that supports Armed Forces training by simulating a range of airborne threat targets. Able to convincingly mimic a variety of aircraft and missiles, the target drone can simulate radar, infrared (IR) and visual threats. This allows Armed Forces to ‘shoot down’ the reusable M-40 in realistic scenarios, allowing them to train with and qualify a wide variety of weapon systems. Developed in-house by Leonardo using commercial components, the M-40 is readily exportable around the world.

Responding to the fact that customers worldwide increasingly need to ‘do more with less’, the M-40 builds on Leonardo’s experience with the Mirach 100/5 to offer a majority of the performance of such a model at a significantly reduced cost. The M-40 is suitable for a range of training purposes, from Ground Based Air Defence (GBAD) artillery training to the simulation of high-performance aerial threats for Navy and Air Force training. Leonardo will also continue to offer the Mirach 100/5 alongside the M-40 to simulate the highest-performance threats facing modern Air Forces. The M-40 uses the same ground control station as the Mirach 100/5, meaning that pilots need very little training to switch to the new drone and armed forces can operate mixed fleets of M-40 and Mirach 100/5 drones.

Because the new M-40 inherits the flight characteristics of the proven Mirach 100/5, it comes with a versatile range of high-performance features including a low-altitude ‘sea skimming’ capability and the ability to execute high-G maneuvers. The refined aerodynamics of the M-40 also allow it to exceed the speed of many twin-engine systems, despite employing a single commercial, multi-fuel engine. The use of a single engine also reduces maintenance requirements and allows for easier deployment even at very remote training ranges. To ensure that M-40 is easy to store and transport, it is designed to operate without pyrotechnics, even for launch and parachute deployment.