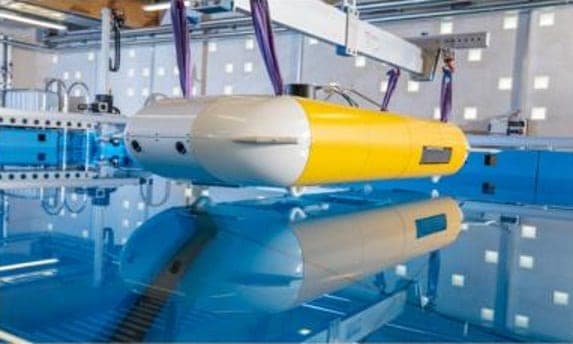 The ThunderFish Alpha AUV (formerly called DEDAVE) was developed by Germany’s Fraunhofer Institute and will be used as a technology demonstrator platform to support ongoing development of Kraken’s underwater sensor and robotics programs.

Kraken plans to upgrade ThunderFish Alpha with larger sensors, including Kraken’s MINSAS 120 sonar with Real Time SAS Processor and its SeaVision 3D Underwater Laser Imaging System. The vehicle size will be increased to support the larger payload capacity and the addition of tunnel thrusters to provide hovering capability for target inspection and precision maneuvering.

While the ThunderFish Alpha platform will be used primarily as a technology demonstration platform, it will also test operational performance related to maritime Robotics as a Service.

Karl Kenny, Kraken’s President and CEO, said, “The delivery of ThunderFish Alpha is yet another milestone in Kraken’s evolution to becoming a vertically integrated underwater robotics company. Over the past few years, AUVs have evolved from an emerging, niche technology to a viable solution and an established part of operations in military, commercial and research applications. The recent shift in industry focus from AUVs being platform/hardware-centric to becoming sensor/software-centric is creating significant sector growth potential for cost-effective and autonomous platforms.”