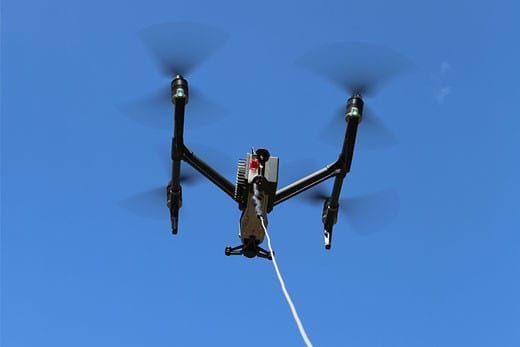 By integrating the FUSE Tether System, DJI Inspire users can increase drone flight time with uninterrupted power from the ground, facilitating long duration flight operations by news media, first responders, infrastructure inspectors, insurance companies, and more. In commercial applications such as these, DJI Inspire drones are the most commonly used platforms with >70% market share according to Frost & Sullivan research. FUSE is based on the same military-grade advanced tethering technology utilized in Drone Aviation’s tethered products sold to the U.S. Department of Defense, including the WATT electric tethered drone, and is an important element for compliance with the FAA’s Part 107 commercial drone safety guidelines.

“Targeting the enterprise and commercial markets is a natural and significant step for our business as we see increased demand from organizations in the marketplace for tethered products in the commercial price range. Working with products produced by DJI, the world’s largest commercial drone manufacturer, we look forward to enhancing the safety and flight capability of current and future DJI drone models as more businesses integrate drones into their operations,” said Jay Nussbaum, Chairman and CEO of Drone Aviation.