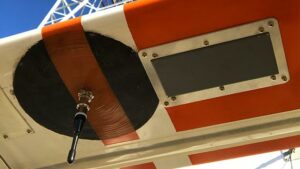 Rockwell Collins has announced that, in conjunction with BNSF Railway, it has successfully demonstrated with a series of test flights how unmanned aircraft systems (UAS) are used to perform Beyond Visual Line of Sight (BVLOS) long linear operations, like inspecting railway tracks using unmanned aircraft, which can increase safety and efficiency for railroads. Additionally, through authorization received from the Federal Aviation Administration (FAA), BNSF is flying without visual observers, which according to Rockwell Collins makes the latest round of test flights the first true BVLOS commercial UAS flights in the continental U.S.

During the flights, BNSF controlled its aircraft utilizing the Rockwell Collins control radiodata link network deployed throughout BNSF’s Clovis, New Mexico, operational subdivision. Using BNSF’s licensed radio spectrum and telecommunications network, the command and control radio automatically detects the best tower-to- aircraft link and manages tower handoffs while maintaining positive aircraft control as the UAS navigates across the range. The aircraft can be launched and recovered from anywhere in the network. In addition, the network can conduct both tower and ground control station hand-offs.

“These tests are yet another successful milestone as part of our railway safety enhancement research and the FAA’s Pathfinder Program,” said Todd Graetz, Director, Technology Services/Unmanned Aerial Systems (UAS) at BNSF. “We believe these tests will provide a roadmap for how organizations such as ours can safely and routinely fly UAS for commercial applications.”

“The use of UAS has enormous potential for industries that need to monitor and inspect critical infrastructure, particularly in BVLOS scenarios like railroads, pipelines and powerlines,” said Ken Schreder, vice president, Strategic Programs, Information Management Services at Rockwell Collins. “Rockwell Collins’ avionics and communications capabilities combined with our aviation network and rail industry experience make us uniquely positioned to provide these types of solutions. Ultimately, our goal is to offer a service that will enable companies to reap the benefits of connected UAS in their business operations.”

Designated the CNPC-1000, Rockwell Collins’ data link conforms to the industry developed performance standard for command and control submitted to the FAA by the RTCA Special Committee 228 for commercial UAS operations in the national airspace. Rockwell Collins, along with the FAA and National Aeronautics and Space Administration, has flown the CNPC-1000 on various aircraft. However, this test represents the first flight for a UAS controlled via a multi-node network of CNPC-1000’s to enable the pilot in command to be over the horizon and significantly beyond visual line of sight of the UAS.