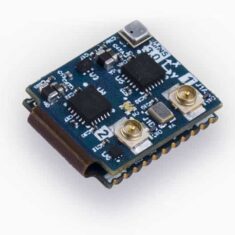 The μINS is a miniature sensor module that is designed to provide high-quality direction, position, and velocity data for drones and robotic applications. It provides this data by fusing sensor data from GPS (GNSS), gyros, accelerometers, magnetometers, and a barometric pressure sensor.

Inertial Sense unveiled the μINS at the AUVSI XPONENTIAL 2017 trade show in Dallas.