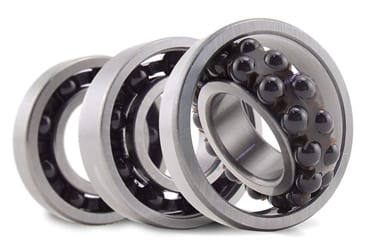 Ceramic hybrid ball bearings use ceramic balls and steel races. Ceramic balls weigh up to 40% less than steel balls, depending on size. This reduces centrifugal loading and skidding, so hybrid ceramic bearings can operate up to 50% faster than conventional bearings. This means that the outer race groove exerts less force inward against the ball as the bearing spins. This reduction in force reduces the friction and rolling resistance. The lighter ball allows the bearing to spin faster, and uses less energy to maintain its speed.

Similarly, the inner and outer races of antifriction bearings often become frosted, fluted, or can get a corrugated pattern imprinted on them. These are not mechanical scars but are due to electromagnetic forces and can lead to bearing failure. They are usually found in modern systems that routinely feature pulse-modulated adjustable-speed motors and inverters with high switching frequencies and short rise times. The best solution substitutes ceramic hybrid bearings for the more traditional, chrome steel counterparts to eliminate pitting and scarring and also run cooler due to less micro-weld adhesion.