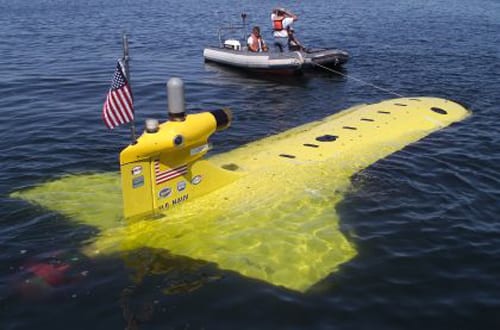 Aerojet Rocketdyne has announced that it has received a $1.6 million contract from the U.S. Navy to mature the demonstration capabilities of a power and energy management system that will allow underwater unmanned vehicles (UUVs) to be charged wirelessly undersea. Under the contract, Aerojet Rocketdyne will also mature and demonstrate the system’s software capabilities, which will enable the Navy to prioritize and schedule fielded UUVs that require remote recharging.

The concept is part of the Navy’s Forward-Deployed Energy and Communications Outpost (FDECO) program, which was born out of the Office of Naval Research (ONR).

“Aerojet Rocketdyne has a long, successful history of designing and developing highly efficient, reliable and safe electrical power management systems that operate in extreme environments – on land, in space and at sea,” said Aerojet Rocketdyne CEO and President Eileen Drake. “We look forward to leveraging that expertise and working with the Navy to develop a system that will allow UUVs to travel further than ever before, without giving away their presence to potential threats.”

The Navy uses UUVs for a number of purposes, including ocean-floor mapping, optimizing remote sensing platforms, as well as locating and identifying underwater threats such as mines. With Aerojet Rocketdyne’s power and energy management system, the UUVs will be able to recharge wirelessly, upload data and download orders – without having to travel to a port or surface ships. The Navy will also be able to coordinate multiple UUVs needing to be recharged wirelessly via FDECO.

Once Aerojet Rocketdyne matures the engineering hardware and software technologies, the company will exercise those capabilities in a series of U.S. Navy demonstrations.