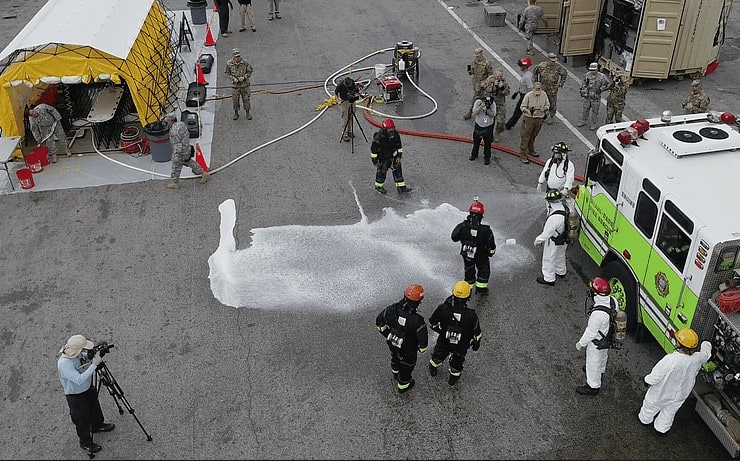 Airborne Response, a drone services and consulting firm, has announced that a fleet of unmanned aircraft systems (UAS), consisting of aerial drones and miniature aerostats, was used to provide live situational awareness at a joint exercise between Miami-Dade Fire Rescue (MDFD), the U.S. Army. and other agencies at the Port of Miami. The combined forces were assigned the mission to mobilize and deploy to assess and/or mitigate a suspected weapon of mass destruction.

“As a Federal Response Partner, the Army Reserve seeks training events with local, state and federal agencies to better hone our skills and to further develop symbiotic training relationships,” said Col. Mike Vail, Chief, Homeland Operations Division for the Army Reserve. “We want both the Soldiers and our firefighters to benefit from the training,” he said. “We both have something in common. We serve the communities we live in and protect those in need during an emergency or incident where lives are in danger.”

“I couldn’t think of a better training environment than one of the busiest ports,” said Lt. Alvarao Tonanez, the HAZMAT lead trainer for one of the largest fire departments in America, with more than 3,000 personnel assigned to MDFR. “To put our firefighters and the Army Reserve unit into a realistic scenario where we could use the assistance in a real-world situation is a win-win for both sides.”

To evaluate the potential of UAS in providing live situational awareness in rapidly expanding incidents, MDFD requested support from Airborne Response. The objective for the UAS was to provide a constant video feed of the exercise into MDFD’s mobile command center where the incident command staff and exercise control staff would be stationed.

“This was a tremendous opportunity to highlight the emerging potential of unmanned aircraft systems for emergency response,” according to Christopher Todd, President and Founder of Airborne Response. “Our primary tasking was to help increase the operational intelligence coming in to the command team as the exercise evolved. Our flight teams were able to capture and stream video perspectives that would have otherwise have been unavailable.”

To accomplish their goal Airborne Response used a combination of three different remote pilot and observer flight teams each flying separate DJI drones – including the Inspire 2, Matrice 100, Phantom 4 Pro, and Mavic Pro – at varying times. The flight schedule allowed for a continuous rotation of pilots and aircraft over the more than six hour duration of the exercise.

Airborne Response also had access to a UAS that had never before been tested in a live exercise – a new version of an ALTA SmartBalloon system carrying specially customized DJI equipment and payload.

“Most drones are limited to a finite amount of flight time by their on-board battery packs,” says Todd. “This leaves potential coverage gaps when working to provide constant overwatch. The ALTA SmartBalloon system allowed us to have a continuous eye-in-the-sky for the duration of the exercise. The aerostat provided a live video of the wide view, while the drones were able to maneuver as needed to capture unique angles and up-close live stream perspectives of each exercise evolution.”

“The new SmartBalloon worked almost flawlessly,” according to Candido Hernandez, Chief Engineer for Altametry, the Miami-based firm that developed and manufactures each patented ALTA SmartBalloon system. “The DJI gimbal and camera system handled the wind gusts much better than we anticipated.”

Hernandez says the DJI equipment on the SmartBalloon included a Zenmuse Z3 camera systems, N3 flight controller, and a Lightbridge 2 video transmission system, all powered by a single DJI Matrice battery which lasted for the full duration of the exercise.

This exercise was just the first step toward developing a robust UAS solution to help first responders, emergency managers, and military personnel establish more comprehensive situation awareness for a wide variety of mission sets, according to Todd.

“The primary mission of Airborne Response is to help enterprises and government entities innovate with UAS,” says Todd. To accomplish that goal, we need to be out in the field working side-by-side with the operators and responders who working toward specific objectives. This is how progress is made, and strategies and tactics are ultimately developed.”