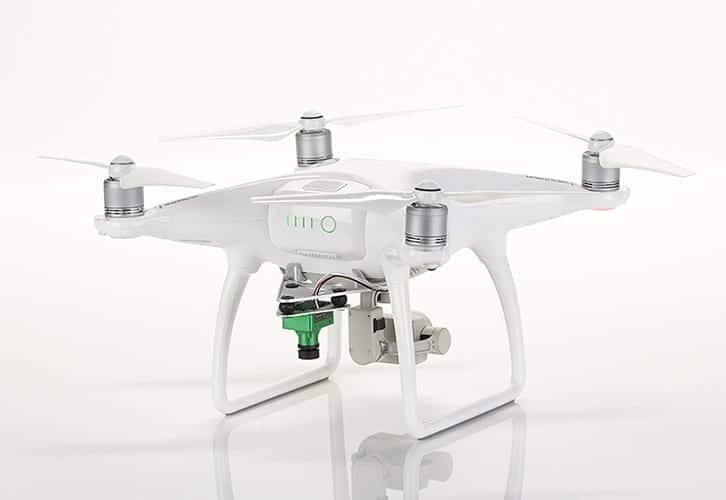 Sentera has announced its new conversion of a DJI Phantom 4 Pro drone into a precision scouting tool that collects TrueNDVI crop health data, in time for the 2017 growing season in the northern hemisphere. By integrating the ultra-lightweight Sentera NDVI Single Sensor onto the Phantom 4 Pro platform, visual-band RGB, near-infrared (NIR) and normalized difference vegetation index (NDVI) data can be captured simultaneously in a single flight, and then read immediately for instant insight and action. The efficiency of capture means users can cover more acres, in less time, and crop health can be assessed more frequently.

“The timing couldn’t be better for our customers in the northern hemisphere! True NDVI technology can really boost their 2017 growth potential,” noted Kris Poulson, vice president of agriculture for Sentera. “In the next month, some growers will see their first crops popping up. Now is the optimal time to start using True NDVI data to make input decisions: while the plants are young and vigor can be influenced.”

The Sentera NDVI Single Sensor features a high-sensitivity global shutter imager and low-distortion optics for crisp, clear aerial RGB and NIR data collection — directly responsible for creating accurate NDVI maps. Sentera’s TrueNDVI solution captures and seamlessly flows data into Sentera AgVault software, where additional analytics can be performed, and data is catalogued, stored, and ready to leverage immediately and for instant action — at the field edge, or across the country.

“The 2016 growing season really proved the value of TrueNDVI for our customers with DJI Phantom and Inspire products,” Poulson continued. “For the first time many growers could analyze data they never thought possible to even capture, and the progression continues into 2017 with the Phantom 4 Pro TrueNDVI upgrade. The ability to visually assess crop health with TrueNDVI — and to do it reliably and efficiently — completely changes the game for the grower, the agronomist, and anyone managing large-scale operations.”

Sentera’s TrueNDVI upgrade leaves the factory-supplied DJI Phantom 4 Pro gimbaled camera untouched, preserving the full functionality of its 1-inch 20-megapixel stock sensor. Existing Phantom 4 Pro drones can be sent directly to Sentera or a Sentera-authorized reseller for modification. Growers who want to obtain a new Phantom 4 Pro drone with NDVI capabilities can purchase an integrated system directly through Sentera or its resellers.