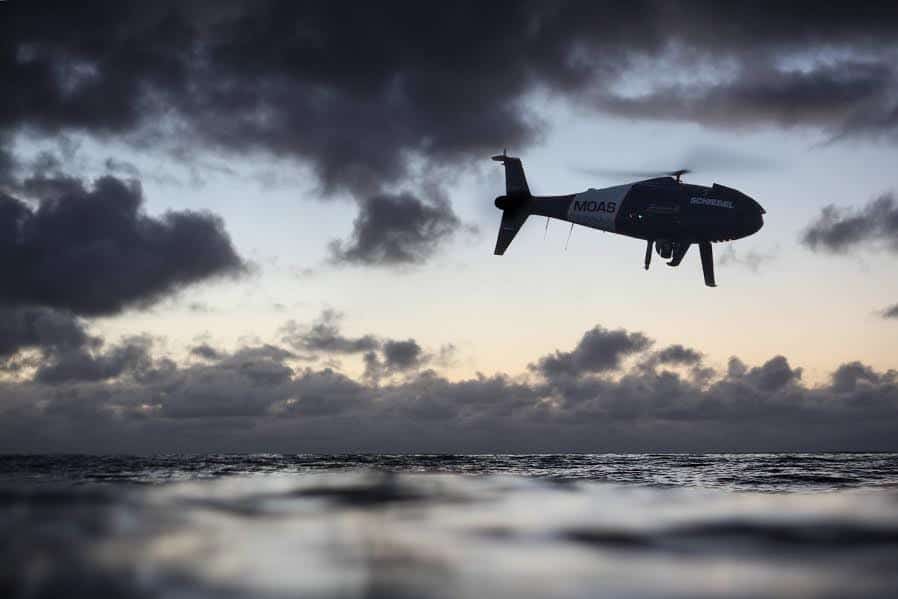 Schiebel has announced that its CAMCOPTER S-100 unmanned aircraft system (UAS) has been operating onboard the charity organization MOAS’ (Migrant Offshore Aid Station) ship MY Phoenix, in support of search-and-rescue efforts in the Mediterranean. Schiebel provided MOAS with a CAMCOPTER S-100 system and an experienced team of onboard operators.

During this year’s mission, which started from Valetta, Malta at the beginning of June, more than 19,000 men, women and children in emergency situations have been saved from drowning in the sea during attempts to cross the Mediterranean by the MOAS’ crew – in partnership with the Italian Red Cross. These results are a huge increase compared to the numbers from the rescue missions undertaken in 2014 and 2015.

Since MOAS launched in 2014, a total of around 30,000 persons have been rescued and given medical aid.

MOAS founder Christopher Catrambone commented: “The use of drones has been instrumental to MOAS’ successful humanitarian efforts. The Schiebel CAMCOPTER S-100, with its takeoff and landing capability on the 40-meter-long ship MY Phoenix, has been providing real-time daylight and infrared video, widening the view of the crew onboard and enabling them to locate migrants in distress even well beyond the horizon.”

“When it comes to shipborne search-and-rescue missions, the better all available assets are used, the more people can be saved. That is the reason why the role of our CAMCOPTER S-100 has once again been so crucial; the information it generates makes up for the best possible coordination of all actors and resources involved in the mission,” explained Hannes Hecher, CEO of Schiebel.