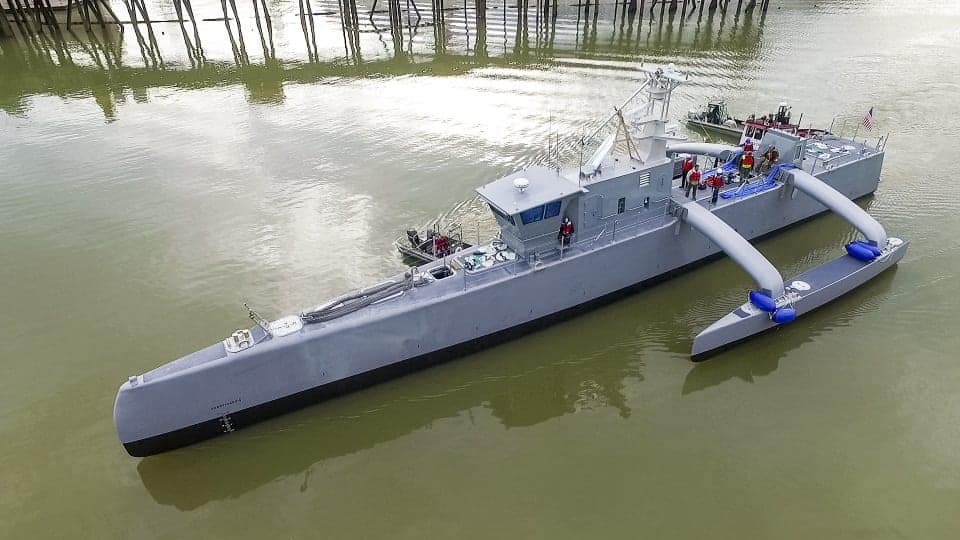 Leidos has announced that it is beginning operational testing of the technology demonstration vessel it is developing for the Defense Advanced Research Projects Agency (DARPA)’s Anti-Submarine Warfare Continuous Trail Unmanned Vessel (ACTUV) program. Testing will occur off the coast of San Diego, California, and follows the successful completion of performance trials.

The 132-foot trimaran, christened Sea Hunter at a ceremony in April 2016, has commenced at-sea testing of sensors, mission control hardware and software, and the autonomy system. In initial testing of Sea Hunter’s autonomy capability, the ship successfully executed a multi-waypoint mission with no person directing course or speed changes. Leidos also completed a test of the Remote Supervisory Control Station (RSCS), which allows remote supervisory control of the vessel and enables new mission tasking from a remote location, either afloat or ashore. The completion of the RSCS test was the final test before beginning more extensive autonomous operations. Testing of the Sea Hunter autonomy system in a variety of mission scenarios is scheduled to continue through fall 2017 as part of a two-year test program jointly funded by DARPA and the Office of Naval Research (ONR).

“Sea Hunter is at the forefront of new autonomy technologies for the U.S. military,” said Mike Chagnon, president of the Leidos Advanced Solutions Group. “The operational testing is designed to showcase the unprecedented capabilities that this type of unmanned vessel could offer our military forces.”