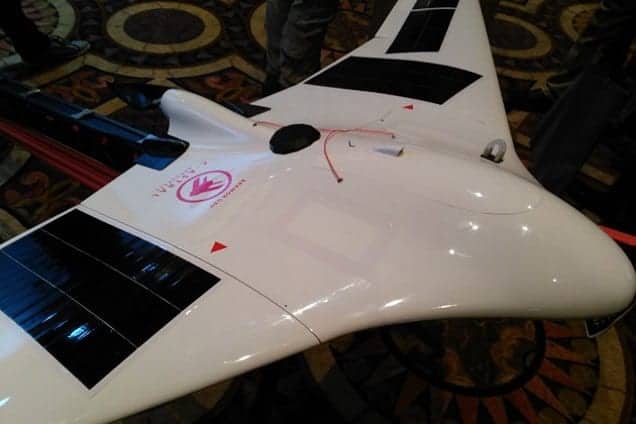 Alta Devices, a developer of solar power solutions for unmanned aerial vehicles (UAVs), has announced that the company’s solar technology will be used to significantly extend the endurance of the next generation of unmanned aerial vehicles being developed by UAV manufacturer C-Astral. Alta Devices recently announced the achievement of a world record of 31.6% solar efficiency with its newest cells.

C-Astral’s latest system, called the Bramor ppX-LRS (Long Range Solar), can fly at least two hours longer with the addition of Alta’s solar technology. The new aircraft is designed for efficient and precise global surveying and sensing capabilities in remote and urban areas. One example application is mapping and surveying of long stretches of road from the sky — finishing the project in only a few days without disrupting traffic; if done from the ground, this kind of work would take two to three months of road closures. The beyond-line-of-sight capability of the UAV, together with its advanced gas detection and SWIR (short wave infrared) sensors, is also suited for pipeline monitoring, replacing manned aircraft systems and helicopters at a fraction of the cost. Alternatively, the aircraft can accelerate and reduce the cost of surveying major railway lines and power line infrastructure.

“From the time of our founding, we have known that solar technology is useful for extending flight times and have continuously pursued it,” said Marko Peljhan, C-Astral co-founder. “Alta’s solar technology is the only mature option on the market that allows us to achieve extended flight times without compromising our high performance aircraft design.”

“C-Astral has an incredible track record of innovation,” said Rich Kapusta, Chief Marketing Officer at Alta Devices, “There are very few companies with the deep expertise required to develop this type of aircraft, and we are extremely proud to be working with them on this endeavor.”