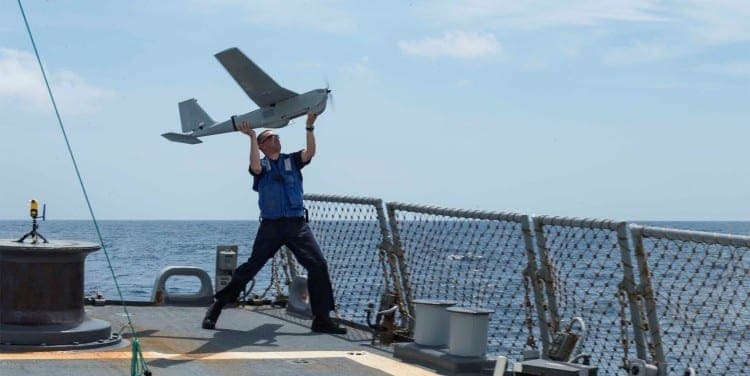 AeroVironment, Inc. has announced that the United States Navy has tested and deployed the company’s RQ-20B Puma small UAS aboard a Flight I Guided Missile Destroyer (DDG Class). Some of these exercises included the use of AeroVironment’s fully autonomous system to recover the aircraft aboard a ship. The US Navy issued a report from the Arabian Gulf describing how Puma AE is also being utilized on Navy Patrol Craft.

Following completion of a Puma AE intelligence, surveillance and reconnaissance mission, the AeroVironment Precision Recovery System provides for the autonomous on-board recovery of the aircraft, without interrupting the ship’s operations. Because the Puma AE is also designed to land and float in water, operators can choose to recover it from the ocean, should mission requirements dictate.

The AeroVironment Precision Recovery System occupies a small footprint and can be managed and operated by members of a ship’s crew, as opposed to requiring external contractors. It is transported in tactical packaging that can be hand-carried aboard and readily transferred from one ship to another.

Puma AE can be launched and recovered very quickly. The UAS features a gimbaled payload that delivers high quality electro-optical (EO) and infrared (IR) imagery and AeroVironment’s secure Digital Data Link (DDL). These features improve situational awareness for the ship and also for boat crews who carry their own remote video terminal (“Pocket DDL”) during approach and assist or other missions.

AeroVironment developed the Puma AE system to compete for, and win, a 2008 United States Special Operations Command (USSOCOM) competitive program of record and subsequently supplied the system to the U.S. Navy Expeditionary Combat Command Coastal Riverine Forces, the US Army for convoy and ground troop support and the US Marine Corps. Most recently, the Navy procured Puma AE systems for use aboard Patrol Craft and also deployed them aboard a US Navy Expeditionary Fast Transport (T-EPF) ship in support of counter illicit trafficking operations in the Caribbean. The Puma AE is also employed by several international partners.