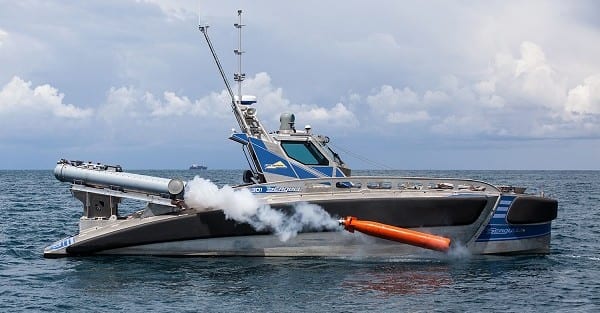 Elbit Systems has announced that it has recently completed a trial test torpedo launch from its Seagull multi-mission, autonomous Unmanned Surface Vessel (USV) system. The trial, performed out of Israel’s Haifa port, demonstrated the capability of Seagull to install and launch lightweight torpedoes, adding to the advanced capabilities of the USV, which is designed to carry out unmanned maritime missions, such as protection of critical sea areas and high-value assets against submarines and sea mine threats.

Introduced earlier this year, Seagull is a 12-meter long multi-mission USV system equipped with one or two vessels that can be operated and controlled in concert from manned ships or from the shore. Seagull provides multi-mission capabilities and can be employed for ASW, MCM, EW, maritime security and other related missions, leveraging modular mission system installation and offering a high level of autonomy.

In its full configuration the advanced USV system delivers unmanned end-to-end mine hunting operation capability, taking the man out of the minefield. It features inherent C4I capabilities for enhanced Situation Awareness (SA) and has a large fuel capacity that allows it to remain at sea for several days.