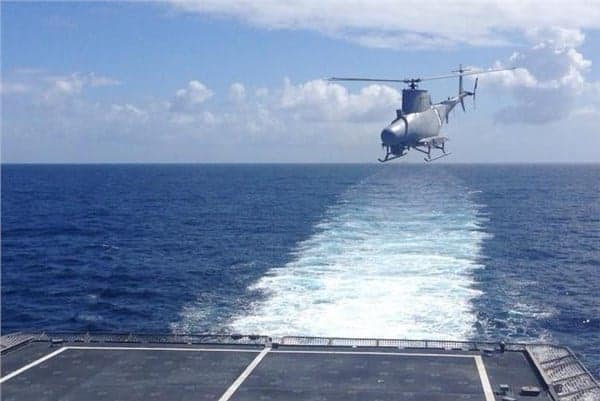 Helicopter Sea Combat Squadron Two Three (HSC-23) will operate both the Fire Scout and the MH-60S Seahawk to increase situational awareness and threat warning in a high-traffic littoral environment.

“This air package will significantly improve the Navy’s surface search capabilities for LCS and its action group,” said Capt. Ben Reynolds, Commodore, HSC Wing Pacific. “The expanded capability will allow our assets to employ an autonomous aircraft off of a naval vessel for search, detection, surveillance, and tracking of maritime surface vessels.”

The radar will be used in support of Surface Unit Warfare objectives. It will significantly expand the search area for the ship’s combat team with the ability to simultaneously track up to 150 targets and increase detection accuracies out to 70 nautical miles.

“Our overall goal for the first-ever HSC/LCS deployment is to integrate the MQ-8B Fire Scout and MH-60S in all available scenarios in order to act as a force multiplier for ships and to function as a vital arm of distributed lethality for the tactical commander,” Reynolds said.

This capability allows the manned/unmanned aviation detachment, working in concert with the LCS and mission package crew, to expand and vastly improve their battle space awareness while building a more detailed common operational picture, he said.

“We continue to evolve into full manned-unmanned teaming by conducting simultaneous missions in the air by determining how best to use MQ-8B and MH-60S for traditional maritime operations,” said Capt. Jeff Dodge , Fire Scout program manager.

The MQ-8B Fire Scout will also support the Navy’s biennially RIMPAC exercise this summer while deployed aboard LCS-4.