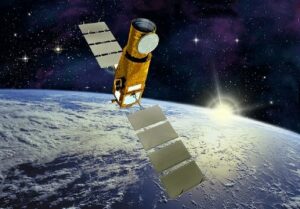 Modular Devices, Inc., a developer of advanced power converters, has announced the availability of custom design radiation hardened DC-DC power converters able to operate at cryogenic temperatures down to 77°K (-195°C). The intended application is to power space instrumentation.

Equipment operating temperature for many near Earth space applications fall well into the military range of –55°C to 125°C. For example, electronics internal to a spacecraft can be limited to –10°C to 40°C, while solar cells can be subjected to –60°C to 95°C.

However, for scientific missions to Mars and beyond, the relative magnitude of the Sun’s radiation intensity diminishes greatly.

The diminished solar radiation, although it may be augmented by planetary or other radiation, results in possible operating temperatures well below the standard military range. Although these cold temperatures may be mitigated by a combination of heaters and insulation, this results in additional weight and power burdens.

Low quantity and typically unique custom requirements
Limited or no published information on active and passive component performance at 77°K
Bipolar transistors and ICs not usable due to low emitter injection efficiency at 77°K, preventing use of industry standard ICs

The first item is an economic consideration, and the second item can be overcome by testing and characterization of candidate components. However, the third item requires an entirely new approach to established power supply design.

Research and testing has shown that commercially available minority carrier devices (bipolar junction transistors, which are optimized for 300K operation, are not practically useful at 77°K. However, majority carrier devices, such as junction and insulated FETs, including MESFETs and HEMTFETs, can be used, provided their radiation performance is acceptable.

Two avenues of practical implementation for the active components exist. One is to build custom IC’s with either HEMTFETs or rad hard CMOS. The second is to use discrete components packaged in a volumetrically small hybrid microelectronic package. The latter approach, adopted by MDI, is much more economical and offers faster development times for unique or low quantity applications.

MDI has developed a triple wall Dewar system for characterizing the parameters of candidate active and passive components at 77°K. A curve tracing program using LabVIEW software is used for data collection. The parametric changes obtained from these measurements are then incorporated into relevant SPICE models, allowing predictions of circuit block performance.

MDI has now developed several power converter building blocks suitable for 77°K/100K+ power converters. Input voltages range from 5 VDC from battery sources to 100 VDC from satellite buses. Output voltages from these circuit blocks are available from 1.2 VDC to 28 VDC. Power levels can be from 1 Watt to 100 Watts. Also available are units that deliver 1KV or more, for propulsion or instrumentation.