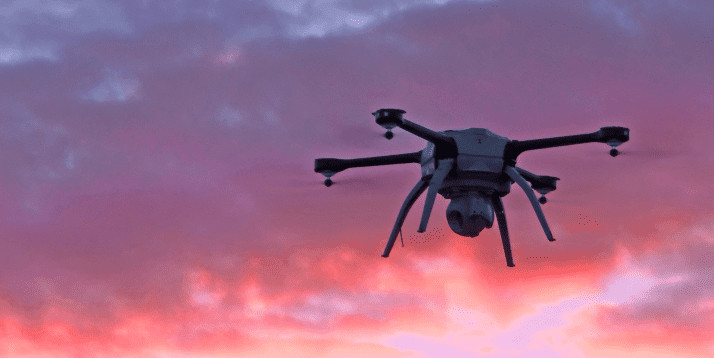 Aeryon Labs Inc., the premier manufacturer of small unmanned aerial systems (sUAS), announced today that Toronto-based Industrial SkyWorks (ISW), a leader in aerial building inspections using unmanned technologies, is the first commercial operator to be approved for for nighttime operations in the U.S. The Aeryon SkyRanger is named as the small Unmanned Aerial System (sUAS) that will be deployed to capture the visual evidence of where a building is losing energy or needs repair, especially in areas that are difficult to access, such as a roof.

ISW has been successfully operating the Aeryon SkyRanger under the Tremco Roofing SkyBEAM brand in Canada over the past 18 months. The SkyBEAM (Building Envelope Asset Mapping) UAS is used to fly around buildings capturing high-definition (HD) video and thermographic (infrared) imagery to locate energy leaks, rooftop damage, poor or missing window sealing or wet rooftop insulation, safety issues and other potential problems.

Infrared scanning is most effective at night, when the sun cannot affect the temperature of the building. Traditional infrared scans require technicians to walk rooftops at night, while other inspections dictate working from scaffolding or cranes. SkyBEAM is safer, faster, more cost effective and more accurate than conventional methods of inspecting and mapping buildings.

“This recent exemption by the FAA is extremely positive for Industrial SkyWorks, Tremco Roofing and Maintenance and for commercial operations in general,” commented Aeryon Labs President & CEO, Dave Kroetsch. “We are excited that Industrial SkyWorks is the first commercial company to conduct nighttime inspections with the Aeryon SkyRanger in the U.S. Aeryon sUAS have been deployed for nighttime missions in search & rescue and other mission-critical applications for years and this shows that the market and the FAA continue to broaden the uses for the technology”.

“We appreciate the significance of this new approval”, said Michael Cohen, President, Industrial SkyWorks. “We regard this as an opportunity to help define best practices and set the standard for nighttime inspection applications. Working with Aeyron Labs will help demonstrate to the FAA and the broader UAS industry that unmanned aerial data capture continues to have many benefits for the commercial market.”

With a reputation and proven track record for reliable operation in extreme environments, Aeryon sUAS set the standard for aerial intelligence gathering – by anyone, anywhere, at any time, including nighttime.

Aeryon Labs will be showcasing their range of small unmanned aerial systems at XPONENTIAL in New Orleans May 3-5, booth 2313.