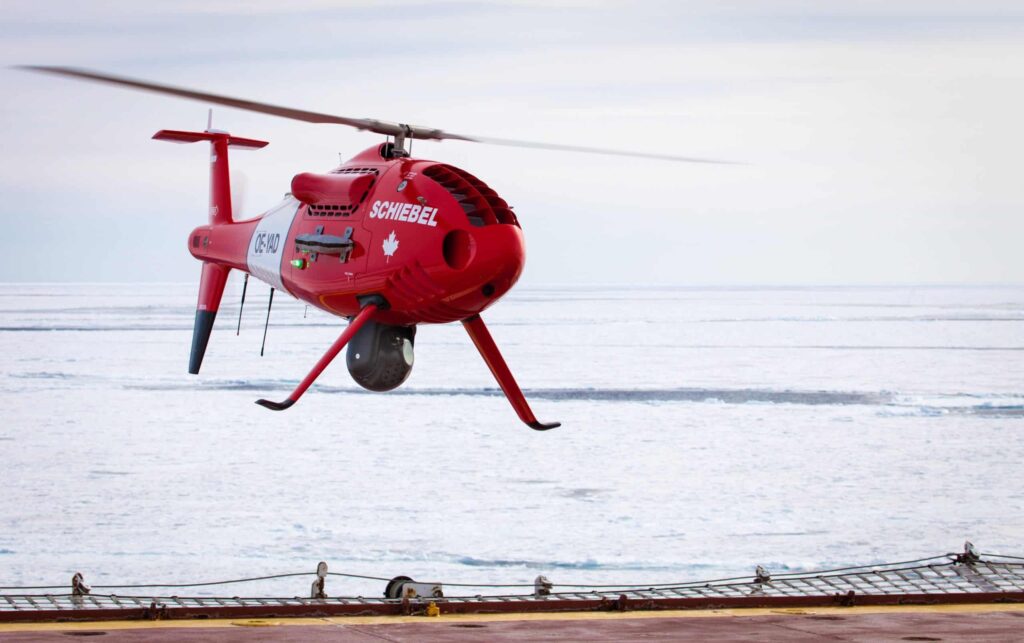 Schiebel’s CAMCOPTER® S-100 Unmanned Air System (UAS) has successfully demonstrated its capabilities to a host of dignitaries from the Canadian Coast Guard, the Royal Canadian Navy, Transport Canada, the Canadian National Research Council and the University of Alaska in partnership with the Memorial University of Newfoundland.

During trials held at the end of March 2016, the CAMCOPTER® S-100, equipped with the Wescam MX-10S payload camera, once again demonstrated its operational value and mission effectiveness in open waters under icy winter conditions. The combination of the VTOL air vehicle and the Wescam MX-10S camera demonstrated its potential to easily identify vessels, animals and objects at long ranges at sea.

“For the Canadian Government this trial is an important step forward to enhancing our operations by using UAV technology”, explains Marc Garneau, Minister of Transport, regarding the motivations for the trials.

The CAMCOPTER® S-100 was deployed aboard the CCGS George R. Pearkes, a light icebreaker of the Canadian Coast Guard. About 60 nautical miles north from Fogo Island, the vessel broke through the ice at speeds of up to 14 knots, guided by imagery from the CAMCOPTER® S-100, which offered to the ship’s captain not only a wide view image of the ice structure, but also identified boundaries between flat and rough ice.

Due to the S-100’s operational maturity in the maritime environment and ability to operate in a broad range of weather conditions, it is perfectly suited to support the demands of the Coast Guard. The flight tests included multiple takeoffs and landings in winter conditions. “Once again the CAMCOPTER® S-100 has demonstrated it value, flexibility and suitability for maritime operations in hostile environments”, Chris Day, Head of Capability Engineering at Schiebel, stated.

One goal of the trials was the enhancement of situational awareness by transmitting pictures directly and in real time to the ships bridge. This S-100 feature is already well proven, i.e. in the Mediterranean for humanitarian operations, and is easily adapted to support activities related to the conservation and protection of the Canadian fishing grounds.

Likewise Kirsty Duncan, the Canadian Minister of Science, agreed that “Science and research play a central role in our Government’s plan to build a thriving economy, and they provide the evidence the Government needs to make sound policy decisions. By conducting leading-edge trials in real environments, we are better able to understand the impacts, benefits and potential applications of this new technology and ensure that the knowledge we gain is shared with our industry and academic partners.”