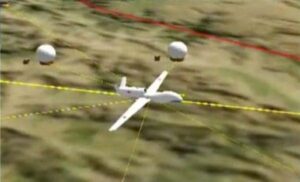 BACN is a high-altitude, airborne communications gateway that translates and distributes imagery, video, voice and data, often from disparate elements, enhancing situational awareness, communications and coordination for warfighters in the air and on the ground. BACN can act as a high-altitude relay and has been used for missions such as airdrop and airstrike operations.

BACN achieved the 100,000 mile milestone flying more than 8,300 missions since the system was first deployed in October 2008. BACN has delivered a mission availability rate above 98 percent.

Northrop Grumman is the prime contractor for the development, fielding and maintenance of the BACN system. The company was awarded the first BACN contract in April 2005 by the Air Force Life Cycle Management Center, Hanscom Air Force Base, Massachusetts.